A Remarkable Record - Three in One Family Have Celebrated Golden Wedding Anniversaries
Through the courtesy of the North Iowa Times we are this week enabled to present a picture which shows the portraits of three couples, all of whom have celebrated their golden wedding anniversaries. Marshall Crawford, Mrs. Corlett and Mrs. Orr are brother and sisters. From the Times we also get the following story of their lives:

Mr. and Mrs. Corlett
John E. Corlett was born on Isle of Man, July 4th, 1828. Came to America with his parents when seven years old, and settled in Duchess Co., New York.

Catharine A. Crawford was born in Pike Co., Penn., Sept. 17th, 1833, and lived there until her marriage to John E. Corlett, May 31, 1851, when they moved to Sullivan Co., New York. They came to Iowa in 1853 and settled on a farm in Farmersburg township where they went through the hardships of pioneer life in the West.

"Uncle John" has given considerable time to public affairs as well as fruit raising is known as one of the best horticulturalists in North-eastern Iowa. Mr. and Mrs. Corlett are parents of twelve children, nine of whom are living. In 1898 they moved to Elkader where they celebrated their golden wedding on May 31st, 1901.

"Uncle John" says he helped unload the material for the establishment of the North Iowa Times in Oct. 1856, when it was located in a small building where Mr. Stowe's store now stands.

Both have always been busy, hard working people. At present, both are enjoying good health. The stories they tell of joys and hardships of their early life in the West are very interesting to the present generation who never knew such.

Mr. and Mrs. Crawford
Marshall Crawford was born in Pike county, Pa., on March 27th, 1828. When 16 years of age he moved to New Jersey. Here and in Massachusetts he spent a few years working at the carpenter trade.

Mrs. B. Richards was born June 7th, 1823, in Boscawen, New Hampshire. When 14 years of age she moved to Lowell, Mass. Marshall Crawford and Mary B. Richards were married in Lowell on the 9th of May, 1853.

They came to Clayton county the first day of June 1854, and settled on Sni Magill. Mrs. Crawford taught the first school ever opened on Sni Magill, in 1854, having twenty-two scholars. Mr. Crawford aided in the building of the schoolhouse. Twelve years ago they moved to Giard where they now reside. One child, a girl, was born to them, Milfred McGill, who died in 1889.

Mr. Crawford was of a family of six children, three brothers and three sisters. Besides Marshall and one brother, deceased, the family consists of Ralph in Chicago, Milo in Washington State, Mrs. John Corlett and Mrs. John Orr.

Mrs. Crawford was of a family of six children of whom one brother and one sister are living, Joseph near Ft. Dodge and Eunice Stearns in Wilmington, New Hampshire.

The golden wedding anniversary was celebrated two weeks ago Saturday the 9th of May.

John Orr and Ellen Crawford were married on Sept. 19, 1852, at Sni Magill and lived there one year. They then in 1853, moved onto their farm three miles west of McGregor where they have ever since that time lived.

Their family consists of four children, two boys and two girls, all living.

Note: To view the Anniversary write-ups, either copy & past the links given above or click the link below.

The photo appeared with the newspaper article, although it didn't reproduce well on the microfilm. 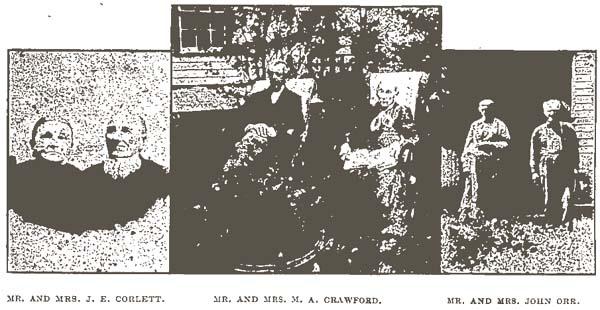