This is Christian Kaiser's birthday. Ninety-five years ago, January 3rd, 1840, he was born in the town of Banzkow, Mecklenburg, Schwerin, Germany.

Today he is one of the few survivors of that hardy race of pioneers who opened up and settled this country to the west of the Mississippi. He is also one of the few men now living who answered the call made by President Lincoln for 75,000 volunteers at the beginning of the Civil War.

Mr. Kaiser came to the United States with his parents and one sister in 1853. The landed at New Orleans after a stormy voyage which lasted for eight weeks and two days. He was then 13 years old. The family came up the Mississippi to Guttenberg, then went inland and settled on government land near Elkport.

In September, 1861, responding to the call of President Lincoln, Mr. Kaiser enlisted at McGregor in Co. E of the 9th Iowa Infantry. From McGregor he went to Dubuque, where the regiment was being assembled, and then to Benton Barracks, St. Louis, for training, shortly thereafter entering active service.

He was severely wounded at the battle of Pea Ridge and spent some time in a hospital at St. Louis. In 1863 he received an honorable discharge from the service.

Returning to Clayton county, he was employed for a time on the farm of Judge Oliver Crary, northeast of Clayton Center. But has was [sic] the spirit of the pioneers and the lure of the west called him. April, 1864, found him at Omaha, where he joined a wagon train crossing the plains. After two months they reached Virginia City, Nevada. "The best mines I ever struck were there," says Mr. Kaiser. He spent between two and three years at Virginia City, where he worked on the famous Comstock lode of the Golden Currier Mining company.

Growing restless, however, he went to Sacramento, Calif., and then to San Francisco, where he took a steamer for New York via the Isthmus of Panama. The isthmus was crossed by rail, as this was long before the days of the canal ... and another steamer taken for the balance of the trip which required twenty-one days.

After a few days in New York he started for Clayton county by rail, coming to Chicago and then to Prairie du Chien, which was "rail's end" at that time, and again he went to work for Judge Crary.

But the "wanderlust" fever was still in his veins and in 1869 he made a second trip to the west. This time he went by rail over the Union Pacific the first railroad to link the east and the west. His destination was Eureka, Nevada, where he was interested in silver mining.

Returning to Iowa in 1871, he was married and rented a part of the Crary farm for a short time. In 1872 he purchased the farm in Cox Creek township which has been his home for 63 years. His wife died in 1912.

In 1913 he made a trip to Germany, where he visited the old homestead and a sister, Mrs. Mary Voss, then 90 years of age, since deceased. Two sisters, Mrs. Anna Rodenberg, in Guttenberg, Mrs. Sophie Scheft, in Michigan, and a brother, John Kaiser, in South Bend, Indiana, have all died since that time.

And so the years have passed. Mr. Kaiser's friends of the early days, those sturdy pioneers, who 50 to 75 years ago were developing our county, live only in memory and the historic page.

Talking of those days he mentions a few, Judge Oliver Crary, Christian Seeman, Wm. Oelke, whom he met in Virgina City in 1864, the senior Wm. Allyn, Rev. Paul Stockfield. "I heard him preach in Garnavillo many times, the best preacher I ever heard," said Mr. Kaiser. Rev. F. Seifert, minister at Clayton Center over 40 years, Carl Buchheim and others, around whom center interesting reminiscences.

"I voted under Lincoln, I fought under Lincoln," says Mr. Kaiser, whose life in many ways could well be taken by us as an inspiration to carry on with honesty, industry, courage and faith.

Christian Kaiser, pioneer, veteran of the G.A.R., worthy citizen of our county, state and country, we salute you on this, your ninety-fifth birthday!

---- ----
Notes:
More about Christian Kaiser can be found on this website: Military Records (Civil War Honor Roll & other military files); his obituary is on the Obit Board; in more than one of the Directories; Census records & others. Use the search box on the home page of Clayton co. IAGenWeb (link below)

He died a couple months after this biography was published, March 13, 1935. Buried in the East Side cemetery, Elkader. 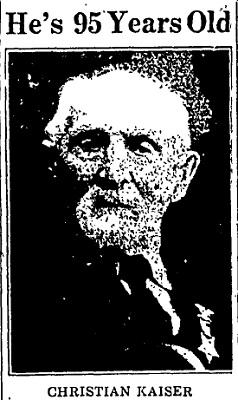