Check here to view Photos ANCIENT AND INTERESTING
We Pay a Visit To a Cemetery Up Among the Cliffs. 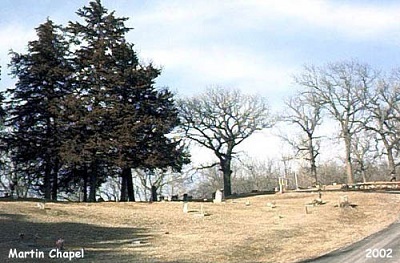 On the top of one of the highest bluffs that overhang the Missouri river bottom at Martin Chapel is a graveyard that is just half a century old. While over in Platteville township, the other day, this Editor of the Tribune took the opportunity of visiting this old time cemetery and we were well repaid for our visit. It is a weird spot away up there among the cliffs and it must have been a man with a turn for the romantic and the picturesque who first planned a graveyard there.

The cemetery was started by the Mormons and the first person buried on this bluff was, an early settler of the county, named Jeremiah David who was interred there early in 1849. His burial was speedily followed by others and it was not long before all the inhabitants of the Missouri bottom made this spot the depository of their dead.

There was formerly a burial place near the old town of St. Mary, but when that city and all its territory was claimed by the waters of the Missouri River its dead were transferred to Martin Chapel. For a quarter of a century this graveyard was filled up from all the region round about.

A visit to the place reveals many odd and interesting circumstances. The first thing that strikes the attentive observer is the lack of dedication that pervades the place. The graves are untidy and illy (sic) kept, and the surroundings are wild and primitive. Like so many other country burial places it has been allowed to go to decay and little if any effort is seemingly made to put things to rights. If there are any surviving relatives or friends of the buried dead you would never know it by the looks of the cemetery.

The number of persons who lie buried here is variously estimated. A conservative figuring would place the total number at not far from 1,000. Of this number, strange to say, not more than half have headstones or any other mark to designate their resting places. Fully 500 people are lying here in unknown graves. Very often in these latter years the diggers of some new grave would strike the bones of some former occupant of the place designed for their neighbor or friend, like the buried cities of the past which lie three, five and seven deep, so the dead in this cemetery are no doubt deposited one on the other as the decades go by.

Three families seem to be more numerously represented, judging from the inscriptions on the tombs than any others. These are the Stinsons, an influential family formerly residing at Bethlehem, and the Clarks, and the Smiths. The finest monument by far to be seen in the cemetery is that belonging to William O'Neil who died in 1887. None of the other monuments are large, or expensive, enough to be worthy of especial note.

There are two other cemeteries in this locality besides this, the Godsey family burying ground and the Pacific City Cemetery, but Martin Chapel's city of the dead is more ancient, and interesting, than either.