The following church history was written by Mary Mays, who has fond memories of this church. We are thankful for her valuable contribution which was provided to IAGenWeb on 09-18-2014. 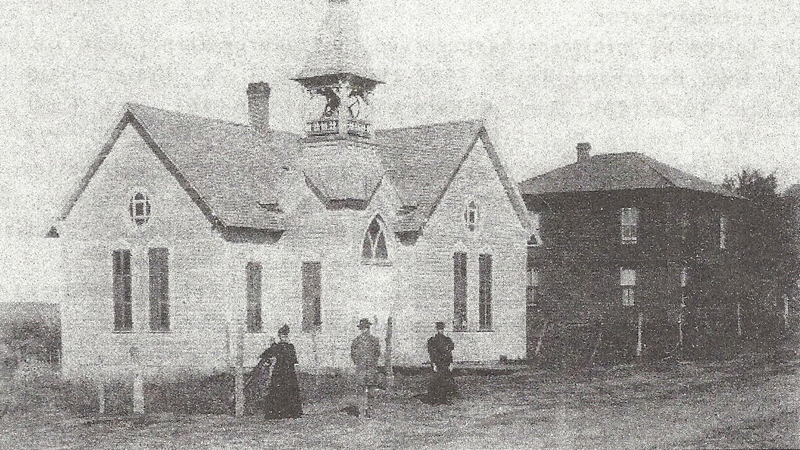 "Iowans were also quick to organize churches. Beginning in the 1840s, the Methodist Church sent out circuit riders to travel throughout the settled portion of the state. Each circuit rider typically had a two-week circuit in which he visited individual families and conducted sermons for local Methodist congregations. Because the circuit riders' sermons tended to be emotional and simply stated, Iowa's frontiers-people could readily identify with them. The Methodists profited greatly from their "floating ministry," attracting hundreds of converts in Iowa's early years. As more settled communities appeared, the Methodist Church assigned ministers to these stationary charges." (1)

"The fathers could not have planned a more effective instrument for the evangelization of a new and growing country than the itinerant system of the Methodist church. At the annual conference each preacher receives an appointment for the year from the presiding bishop to which he is bound to go. Thus, it was that Landon Taylor was appointed to be presiding elder of the Sioux City district of the Upper Iowa conference and William Black to the Crawford Carroll Mission. The Sioux City district, be it known, covered all of northwest Iowa and the Dakotas, and the Crawford Carroll Mission had appointments as follows: Smithland, Mapleton, Denison or Mason's Grove, Carrollton, Lake City, Sac City and Ida Grove." (2) Preachers were assigned to charges and it appears that in this account Mason's Grove was associated with the Denison charge; however, Mason's Grove was actually located just east of the current location of Deloit.

According to the account of Mr. E. W. Pierce in F.W. Meyers book, "History of Crawford County, A Record of Organization and Achievement, Vol I" in 1856 there appears to have been no religious services held in the county. Carroll, Sac and Crawford Counties were set off by the Upper Iowa Conference for mission work. Before a church was built worship services were held in private homes and school houses. During this time period Reverend William Black was appointed preacher and reached Crawford County the week ending October 18, 1856. According to the "Reminiscences of Thomas Dobson" as printed in F. W. Meyers book, Reverend Black preached his first sermon October 19, 1856 in the home of Rufus Richardson, near the half section corner on the west side of section 8-84-38 in Mason's Grove. By his account, a society of seven members was organized which included George C. King-leader, Emma R. King, Rufus Richardson, O. S. Wright-exhorter, Salatha Wight, Morris McHenry, and J. B. Huckstep and wife joining at a later time. (2 p. 48)

Another account from the book states that "The first sermon, which was also the first gospel message in Crawford County was preached by Rev. William Black at the home of Mr. Rufus Richardson near Mason's Grove, just east of Deloit, October 16, 1856. At this meeting a class was formed and arrangements made for regular services. The class numbered seven and the class leader was Mr. George C. King, who with his wife, Mrs. A. F. Bond, Mr. and Mrs. Rufus Richardson, Mr. and Mrs. O. F. Wight and Morris McHenry composed the first church organization of the Methodist church in this county. Five more members were soon added: Mr. and Mrs. J. B. Huckstep, Mr. and Mrs. W. B. Todd, and Mrs. Vincent Cheadle." (2 p. 264) "The first quarterly meeting for Crawford Carroll was at the schoolhouse in Mason's Grove, presiding Elder Landon Taylor and Pastor William Black both present." (2 p. 264)

The first Sunday School in the county was organized at Mason's Grove by the Methodist Episcopal Church on June 7, 1857, with George C. King being Superintendent, Mrs. Todd, Mrs. King and Morris McHenry being teachers.(2 p. 49) By another account the first Sunday School was organized at Mason's Grove, under the auspices of the M. E. Church on the 7th day of January, 1857 with twenty pupils, George C. King being the Superintendent. (3)

In the fall 1857, at the session of the Upper Iowa Conference, Crawford county was set off as a separate charge and preaching commenced at Comfort's on the Boyer river, at Denison, at the Mason's Grove School House and at Huckstep's, three miles east of Mason's Grove.

A third quarterly meeting for the Crawford Carroll mission was held at Mason's Grove May 26, 1860. (2 p. 265) It appears that Mason's Grove and Denison remained a charge as at the close of the annual conference in 1864, it is reported that Reverend M. D. Collins was appointed to the Denison charge, which included Deloit and Paradise (2 p. 265). In early summer of 1863, the Methodist Episcopal Church of Dow City grew from the Paradise appointment of the Deloit-Denison charge. It appears that from 1868-1876 Denison and Deloit remained a charge until Denison was made a station in 1876.(2 p. 266) It is debatable, since the sources differ in regard to the third quarterly meeting for the Crawford Carroll mission, as to whether it occurred in 1858 or 1860, which in turn may alter the date of the fourth quarterly meeting.

According to "The History of Western Iowa, is Settlement and Growth" the Methodist Episcopal Church in Denison was erected about the year 1865. At which time, "Rev. William Black, the first pastor, was succeeded by the following: Revs, Mr. Glassner, Edwin Satterlee. M. D. Collins, W. E. Smith, Mr. Glanville, B. Shinn, Mr. Way-nick, Mr. Fegtly, E. Sage, Asa Steeth, J. B. Wilson, Mr. Beck, and the present pastor". The present pastor being Reverend D. Austin. It would appear that in the cases of Reverend Black, Reverend Glassner and Reverend M. D. Collins that they were sharedin some capacity with the Deloit church.(3 p. 473)

The Deloit Methodist Church was built between the years 1883 to 1885. As written in the Deloit Iowa Sesquicentennial History Books "According to the warranty deed, lots 6, 7, and 8 were purchased from Jesse Mason for a sum of $32.00. The lots were sold to three trustees of the First Methodist Episcopal Church; the trustees were Esau Mc Kim, Thomas Bennett, and E. F. Fegtly. The document was dated May 28, 1883 and signed by an X designated to be Jesse Mason's mark." (4)

Construction of the building began in 1883 and it was completed in 1885. From the Denison Review posted on the Iowa GenWeb site, the M. E. church was dedicated on Sunday, June 7, 1885 with services being conducted by Reverend J. W. Walker presiding elder, Reverend J. W. Gardner (Deloit Methodist pastor) and Reverend Henry Brown of the Odebolt M.E. church. (5)

Reverend J. M. Dudley arrived and began living in Deloit in October of 1885 and remained until 1888. Activities sponsored by the M.E. church included an oyster supper, quarterly conference meetings, and the organization of a Sunday School lyceum. (5) 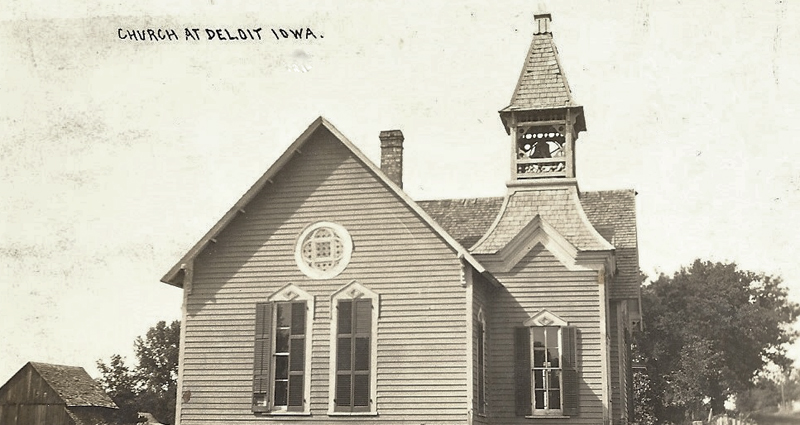 The middle and latter part of the decade were dominated by the pastorate of Reverend George C. Clift. By account of the Denison Review, Deloit News posted on the Crawford County GenWeb site under the date 9-30-1898, "Reverend Clift has been in Deloit for the past four years and his earnest and conscientious work has made him many friends who regret his departure." (6) His last sermon was conducted on 9-22-1897, which given his four years of service puts him in Deloit in 1893. Reverend Clift was well documented in accounts from the Crawford County GenWeb site during the years of his service in Deloit and stands out as a pastor.

Reverend George S. Clift was born in November of 1844 in (7) Pennsylvania and died in 1920 in Washington County, Alabama. He married Katherine M. Clift (Katie) (7)and they had one daughter Winnifred Katie Clift. (8) Reverend Clift is cited as holding or assisting with numerous revival meetings. He regularly conducted quarterly meetings, sometimes with the assistance of Reverend J. W. Lothian the presiding elder of the Ida Grove district. (9) He delivered a series of lectures entitled, "Ten Plagues and Their Counterpart in Our Land". He was a regular attendee in the annual conferences of the Northwest District. He was instrumental in initiating the construction of the Boyer Methodist Episcopal Church which was completed in 1900, after which he was transferred to Smithland Iowa in 1898. During his ministry the church and the parsonage received a new coat of paint and by the following account appears to have been painted by Reverend Clift. August 18, 1897, Denison Review, Deloit News "Rev. G. S. Clift is engaged in painting the M.E. church." (6)

The Epworth League, a service organization of the Methodist Episcopal Church, was active in Deloit during this decade. Its mission being that of getting young Methodists involved in good works and to train Christian soldiers for the ministry. The predominate focus of the programs they presented revolved around the issue of temperance and missionary work.

During this time period the Sunday School held picnics, the Epworth league gave an ice cream social, a Children's day service was held at the church, as well as Christmas and Easter programs were carried out. Visitors came to the church from Vail and Kiron to attend programs. By all accounts, this was a very active decade for the church, whether it's because there is a large amount of information recorded during this time period or if it is related to the energetic efforts of Reverend Clift is unknown.

Little information regarding the activities at the church for this decade was found. Documentation regarding the ministers is conflicting. It would appear that ministers from other area churches would conduct ceremonies for the Deloit church making it difficult to reconcile some of the information found with church records. In 1901 family records record that Reverend E. M. Holmes conducted the marriage ceremony for Samuel and Tabitha (Winey) Anderson, however there does not seem to be any documentation that Reverend Holmes was appointed to the Deloit church during this time period.

It is worth noting that Reverend Thomas Maxwell was from Crawford County and served the church with Boyer in 1901.