A graveside funeral will be at 1:30 p.m. Friday at Memorial Lawn Cemetery in Fairfield.

Memorials to the family can be mailed to Marlene WYATT, 2070 Libertyville Road, Fairfield 52556.

A homemaker, Mrs. FARMER lived most of her life in Fairfield.

She was a member of the VFW Auxiliary.

Survivors include: seven children, Roger FARMER with Cathy of Marietta, Georgia, Kathy WILLIAMS with Charles of Fairfield, Madge SCHMITTER with Doug of Libertyville, Randy FARMER with Lori of Fairfield, George FARMER with Krista of Pittsboro, North Carolina, Georgia CLOUSE THOMANN of Bladensburg, and Marlene WYATT with Bill of Fairfield; 19 grandchildren; and numerous stepchildren and great-grandchildren.

In addition to her husband, she was preceded in death by: her parents; three sisters, Janette, Margerite and Macil; and two brothers, Clarence and Sherman. 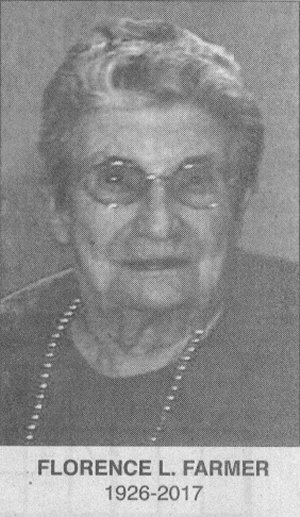