Funeral services will be at 10 a.m. Wednesday, December 30, 2015 in Birmingham United Methodist Church with the Rev. Herb Shafer and the Rev. Larry Smith officiating. Visitation will open at 4 p.m Tuesday at the church with family present 5-7 p.m. Masonic services by Clinton Lodge will follow the visitation and all are welcome to the service.

Burial will be in Memorial Lawn Cemetery, Fairfield. Memorials to Birmingham United Methodist Church may be left at the church or mailed to the family at 800 South 14th Avenue, Washington, Iowa 52353. Pedrick Funeral Home, Keosauqua is assisting the family.

He was born March 19, 1918 on the family farm northeast of Libertyville to Harvey and Isabelle WILSON LOUTH. He graduated from Batavia High School and married Florence Ruth ANDERSON March 20, 1942 in Kahoka, Missouri. They lived in Birmingham until moving to Sunnybrook Assisted Living in Fairfield in 2006. Florence died December 31, 2014.

Freemasonry was an important part of Elmer's life. He became a Master Mason in Clinton Lodge No. 15, Fairfield in 1946 and served as Worshipful Master in 1951 and again in 1993. Elmer was an avid gardener, fisherman and mushroom hunter and most of all loved being with family, hosting family events and enjoying his children, grandchildren and great-grandchildren.

In addition to his wife, he was preceded in death by three sisters, Erma JEFFREY, Mildred BABCOCK and Betty LAWSON. 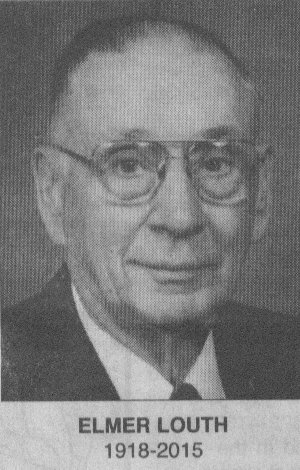