The funeral is set for 10 a.m. Saturday at Birmingham United Methodist Church, with the reverands (sic) Herb Shafer and Larry Smith officiating. Burial will be in Memorial Lawn Cemetery in Fairfield.

Visitation will open at 4 p.m. Friday at the church, with family present from 5-7 p.m.

Memorials to Birmingham United Methodist Church can be left at the church or mailed to the family at 3000 W. Madison Ave., Apt. 412, Fairfield 52556.

Mrs. LOUTH was born Jan. 19, 1924, in Birmingham, the daughter of Zachariah and Verda SADLER ANDERSON. She married Elmer LOUTH March 20, 1942 in Kahoka, Missouri.

She retired from the United Postal Service (sic) in 1988 after 20 years of service.

She was a member of The Order of Eastern Star, Chapter No. 549, Ollie, White Shrine, Ottumwa, Birmingham American Legion, Birmingham UMW and Birmingham United Methodist Church.

She played bridge with bridge clubs in Birmingham for more than 50 years. She fished, gardened, hunted mushrooms, gathered hickory nuts and preserved the fruits of her labor. She loved being with family and hosting family events.

She had resided at SunnyBrook Assisted Living in Fairfield since 2006. 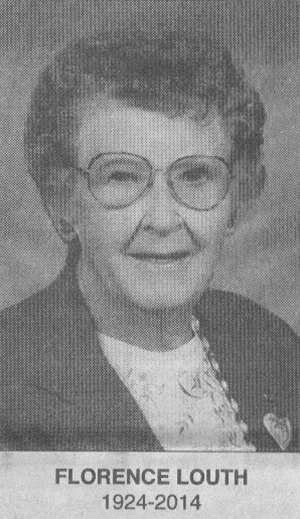