The funeral will be 10:30 a.m. Wednesday at Behner Funeral Home in Fairfield, with the Rev. Earl Swigart officiating. Burial, with military rites, will be at Lockridge Cemetery in Lockridge.

Visitation for family and friends will be 5-8 p.m. Tuesday at the funeral home.

Mr. HAINES served in the Army for three years during the post-World War II and Korean War (sic - Korean Conflict) and was stationed in Germany.

He worked 38 years on the Iowa Department of Transportation crew for Jefferson County, and he also farmed.

Mr. HAINES was a member of the VFW, Eagles Club and Moose Lodge of Mt. Pleasant. He enjoyed going to and participating in Old Threshers, tractors, horses and horse pulls, playing cards and dancing. He also enjoyed attending his children's and grandchildren's activities. He liked talking to people and was a friend to all.

In addition to his wife, he was preceded in death by: his parents; one daughter, Karla HARVEY; one brother, Eddie HAINES; and one sister, Violetta HAINES. 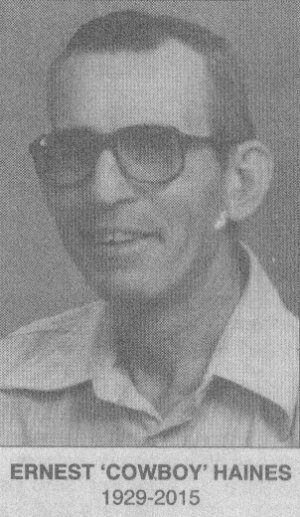