The funeral is scheduduled (sic) for 10 a.m. Monday at Raymond Funeral Home in Fairfield, with the Rev. Herb Shafer officiating. Interment will be in Memorial Lawn Cemetery in Fairfield.

The family will receive friends from 9 a.m. until the service Monday at the funeral home.

A memorial has been established to Noah's Ark Animal Shelter in Fairfield. Online condolences can be made at www.raymondfuneralhomes.com .

Mrs. DROZ grew up in Fairfield and graduated from Fairfield High School.

She and her husband moved to a farm south of Fairfield in 1963. They moved to Stockport and owned and operated the Ponderosa Tavern.

They enjoyed riding their horses in parades and rode each year in the Fort Madison Rodeo parade. They also showed ponies and mules in parades. She loved her cats.

After her husband's death, she worked at the Samuelson Café and the Dream Motel in Fairfield.

In addition to her husband, she was preceded in death by: an infant son, Jerry Duane DROZ; her parents; and one brother, Chester HESTON.

Note: Husband Richard is in Lot Memorial 95 - space 4, and their son Jerry is in space 6. 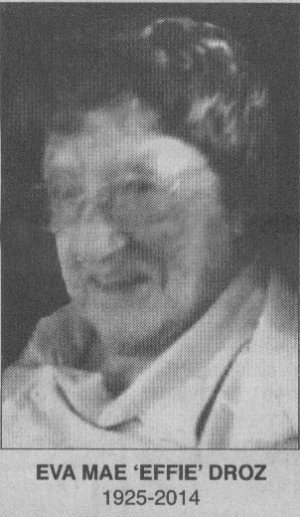