Visitation for family and friends will be held from 6 p.m. to 8 p.m. Friday, August 23, 2013 at Behner Funeral Home & Crematory in Fairfield.

Services will be held at 10:30 A.M. Saturday, August 24, 2013 at First Christian Church Disciples of Christ, with Pastor Art Sathoff officiating. Burial will be in Memorial Lawn Cemetery with Military Rites, and a luncheon will follow at the Eagles.

Robert served in the Army during World War II. He retired from Loudens Co. after 45 years. He managed Loudens Depot Credit Union for 30 years. He was a member of the Eagles Club and VFW. He enjoyed square dancing, and also worked with Helping Hands at First Christian Church. He loved spending time with family and friends. He knew and loved so many people, and he will be greatly missed.

Robert is survived by one daughter, Carmalee (Kim) MANARY of Conroe, TX, one daughter-in-law, Cathy LAWSON of Fairfield, and three grandsons, Jacob, Jordan and Ethan LAWSON.

He was preceded in death by his parents; wife, Betty Mae; one son, Robert A. LAWSON Jr.; one daughter, Cindy Lou LAWSON; and nine siblings.

Note: Robert was the son of Ethel and Frank LAWSON. 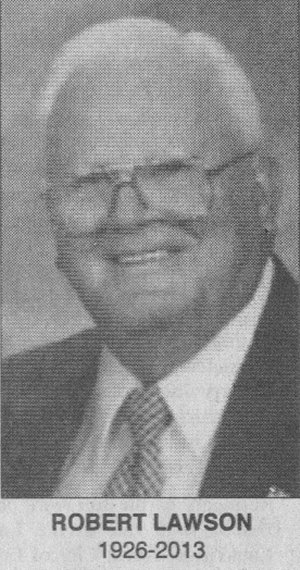