Born August 18, 1926 to Anthony W. and Georgia M. (TONKINSON) BOYCE in Fairfield Iowa. Glen was the youngest of three children.

Glen graduated from Fairfield High School in 1945. He was inducted into the U.S. Army on February 5, 1945 and completed Basic Training at Camp Maxey, Texas. World War II ended as Glen was being shipped across the Pacific Ocean. He participated in the occupation of the Korean peninsula as a medical orderly, serving with the 377 Station Hospital, 24th Corps in Seoul, Korea. Glen was awarded the Asiatic Pacific Theater Ribbon, the Army of Occupation Medal Japan and Korea, Good Conduct Medal, and the Victory Medal. He was honorably discharged at Fort Sheridan, IL on December 11, 1946.

Glen was baptized in the Baptist faith and became a Lutheran after his marriage. He was a member of First Lutheran Church in Farifield since 1953. Glen served in several capacities at First Lutheran, including Sunday School Treasurer for many years, Sunday School Superintendent, and several terms on the Church Council. He was an associate member of Trinity Lutheran Church in Burlington since 1999.

He especially enjoyed his vacations in the Rocky Mountains and reminisced over trips to Yellowstone and Grand Teton National Parks, Colorado, Idaho, and New Mexico.

Glen was an advocate of a college education; all four sons are graduates of Iowa State University.

He was preceded in death by his wife, Virginia (sic - in 2011), parents, sister Avon ANGSTEAD, and brother Stanley (Bud) BOYCE.

The funeral service for Mr. BOYCE will be 10:00 AM Thursday, August 2, 2012, at Thielen Funeral Home with Reverend Ryan Cosgrove officiating. A time of food and fellowship will be held at the Thielen community room immediately following the service. A graveside committal service will be at 1:30 PM at Memorial Lawn Cemetery in Fairfield.

In lieu of flowers, memorials have been established for the American Diabetes Association and the Great River Hospice House.

A photo tribute can be viewed and condolences can be sent to the family by visiting Glen's obituary at www.thielenfuneralhome. 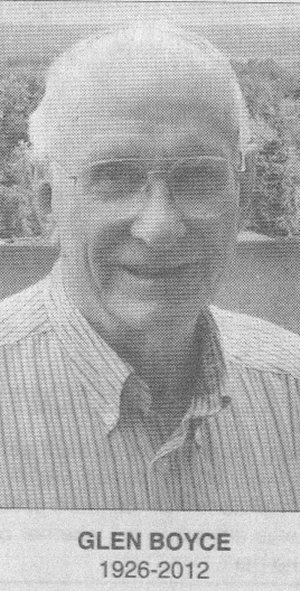