Visitation will be from 8-10 a.m. Wednesday at the funeral home, with the family present 9-10 a.m.

In lieu of flowers, memorials have been established to American Diabetes Association and Great River Hospice House.

A photo tribute may be viewed and condolences may be sent to the family by visiting www.hassthielen.com.

Mrs. BOYCE spent her childhood in the Lockridge area and graduated from Lockridge High School in 1950. She worked at American Republic Insurance Co. and Bankers Life Insurance Co. in Des Moines prior to marrying and briefly at Dexter Co. in Fairfield after marrying.

Mrs. BOYCE was confirmed in 1946 at St. John's Lutheran Church, Lockridge. She was a member of First Lutheran Church in Fairfield since 1953. She sent church literature to parents of newborn babies and taught the nursery level of Sunday school for many years. She had been an associate member of Trinity Lutheran Church in Burlington since 1999.

Survivors include her husband; four sons: Jeff and wife Jean of New Ulm, Minn., Randy and wife Marilyn of Littleton, Colo., Wes and wife Kathy of Cedaredge, Colo., and Kevin and wife Susan of Papillion, Neb.; five grandchildren; on stepgrandchild; and one sister: Pauline PASCH of Burlington.

She was preceded in death by her parents and one infant brother, Robert PASCH. 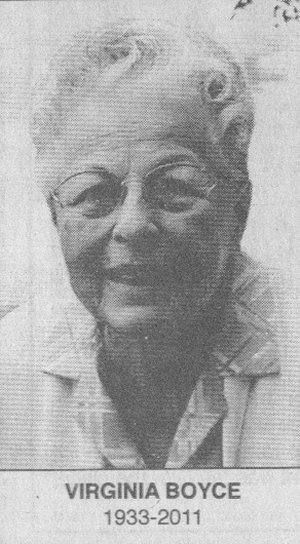