A service will be at 11 a.m. Monday at Selma United Methodist Church, with the Rev. Phil Campbell officiating. Burial will be in Memorial Lawn Cemetery in Ottumwa.

Open visitation will begin at 2 p.m. Sunday at Pedrick Funeral Home in Douds, where the famiy will be present 3-5 p.m.

Memorials to Selma United Methodist Church may be left at the funeral home or church or may be mailed to the family at 32143 155th St., Floris 52560.

Mrs. NICKLIN graduated from Bloomfield High School in 1944 and attended Parsons College. She taught at White Elm School in northeast Davis County. She and her husband raised purebred Jersey cattle on the NICKLIN family farm in the White Elm neighborhood.

Mrs. NICKLIN was a member of Selma United Methodist Church and Fairfield Camp of Gideons International. 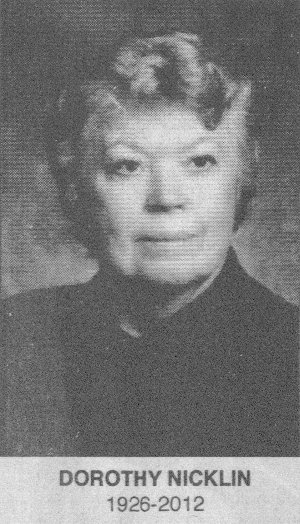