Margaret C. PACHA, of Iowa City, passed away on February 14, 2012 at Mercy Hospital surrounded by her family.

The family kindly requests that instead of flowers, that memorials be directed to The Regina Foundation. Lensing Funeral Service in Iowa City is handling arrangements.

Born on August 13, 1918, she was the daughter of Bernard J. PAULY and Caroline CONRAD PAULY. She attended the Catholic schools in Harper, Iowa. On February 8, 1939, she married Leonard J. PACHA.

Margaret worked at Children's Hospital at UIHC, and later at Mercy Hospital where she was Director of Housekeeping for 18 years. She was a longtime member of St. Patrick's Church in Iowa City. A 56 year member of St. Patrick Church, Margaret belonged to the Altar and Rosary Society and enjoyed working with flowers, playing cards, and needlework and dancing and fishing.

Margaret was preceded in death by her husband Leonard, in 1970, her parents Bernard and Caroline PAULY, twin sisters Genenieve and Gwendoline MOELLER, sisters Agatha MEHMERT, and Eulalia ZUMDOME, and brothers, Bernard R. PAULY, and Herbert PAULY.

On-line condolences may be left for the family at www.lensingfuneral.com. 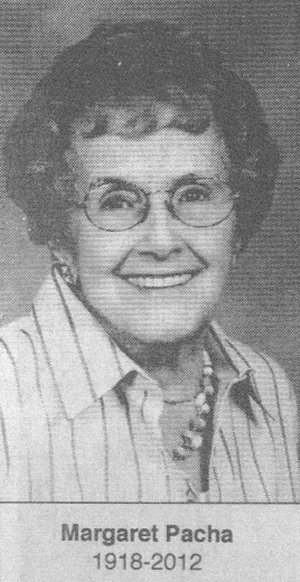