A funeral will be at 11 a.m. Tuesday at Selma United Methodist Church, with the Rev. Ann Donat officiating. Burial will be in Memorial Lawn Cemetery in Ottumwa.

Open visitation began at 2 p.m. today at Pedrick Funeral Home in Douds, with the family present from 5-7 p.m.

Memorials to Selma United Methodist Church may be left at the funeral home or church or may be mailed to the family at 32153 155th St., Floris 52560.

Mr. NICKLIN was born July 8, 1925, in Davis County, southwest of Selma, the son of Carroll E. and Reba STAGERS NICKLIN. He married Dorothy M. TALLEY Oct. 3, 1948, at her parents' home near Floris.

Mr. NICKLIN grew up on the family farm in Davis County. He also lived in Selma and Douds as a youth. He attended White Elm rural school and Selma and Douds-Leando Consolidated Schools. He graduated as valedictorian in 1942 from Douds. He worked at Barker Mercantile in Douds for a year and then entered the United States Navy, becoming a pilot.

After release from active duty, Mr. NICKLIN returned to the family farm and raised and showed purebred Jersey cattle at the Iowa State Fair, other fairs and shows. He was a United State Mail (sic) rural carrier out of Selma and Douds post offices for 38 years, earning the million mile safe driving award. He most recently resided at Prairie Hills Assisted Living Center in Ottumwa.

Mr. NICKLIN served two terms as president and one term as secretary-treasurer of the Iowa Jersey Cattle Club. He also served on the planning committee of the American Jersey Cattle Club and was an accredited dairy cattle judge. He was a former member of Douds Methodist Church. He later joined Selma United Methodist Church, serving in numerous capacities including as an adult Sunday school teacher for 46 years. He was a certified lay speaker and was involved in Van Buren Cooperative Ministries. He was a member of the Fairfield Camp of Gideons International, serving many years as president of the camp. He had been a Gideons speaker. Mr. NICKLIN was a 65-year member of American Legion John Hyson Reneker Post No. 494 in Douds. He had been a member of Douds Community Club, Davis County Extension Council and Davis County Republican Central Committee. 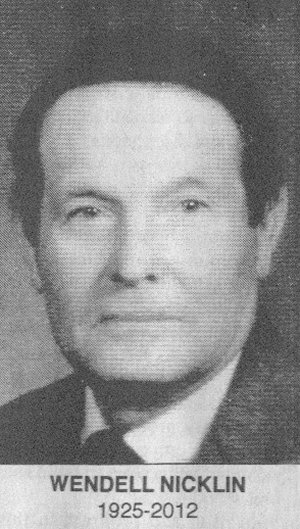