Charla Ann BOYLE, 94, of Keosauqua, Iowa passed away on Tuesday, November 15, 2011 in Bettendorf, Iowa. Visitation will be from 5:30-7 PM Friday, November 18 at the Runge Mortuary in Davenport and from 11:45 AM-1 PM on Saturday, November 19, 2011 at the Cantril Christian Church, where funeral services will follow at 1 PM. Rev. Jerry Caughron will officiate. Burial will be in Fellows Cemetery in Keosauqua. Memorials may be made to the Cantril Christian Church of the Keosauqua Public Library. Online condolences may be made at www.raymondfuneralhomes.com.

During the 1930's and '40's (sic), Mrs. BOYLE taught ballet and tap dancing. She was an enthusiastic reader (a trait she passed on to her children and grandchildren) and an accomplished artist in pastels, charcoal, water color, and oil painting. She acted as her husband's receptionist in his chiropractic practice prior to their retirement in 1998. Since 1955 she was a member of the christian Church, where, in earlier years, she assisted with numerous church funeral luncheons and enjoyed her friends in the Christian Women's Fellowship. Some of her favorite times were spent playing games with her grandchildren. Her scrumptious apple and pumpkin pies were always eagerly anticipated at family dinners.

In addition to her husband, she was preceded in death by her daughter, Pam HOFFMAN, in 1976, her parents, and sisters: Coetta DUFFY (in infancy) and Winifred LONG, and brothers Charles (Jr.), Howard, and Robert DUFFY. 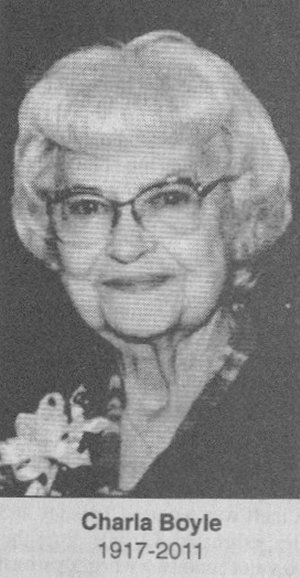