Mrs. Arabelle Snell, aged 83, died Thursday afternoon at her home here after an illness of many months' duration. Funeral services were held Sunday afternoon at two o'clock from the First Methodist church with burial in the city cemetery.

Arabella Curry, daughter of Alexander and Eliza Curry, was born at Union Town, Pennsylvania, on March 8, 1852. When a child she came with her parents to Iowa, they settling on a farm near Bethel; later moving to Postville. While living there she became acquainted with George Henry Snell of Monona, and they were united in marriage at Waukon, Iowa, on December 26 1870.

To them were born nine children. One son and one daughter have preceeded her in death, also her husband, who died on June 3, 1915.

Mrs. Snell has been in failing health for about three years and passed away on Thursday, November 14, 1935, at the age of eighty-three years.

Mrs. Snell has been a life-long member of the Methodist Church, joining when a young girl, and remaining loyal to it through the years. She was the oldest living member of the Ladies Aid here to which organization she gave her best services. Faithful in the doing of her tasks she gave of herself unsparingly for her family and friends setting an example of unselfish living which had brought forth fruit in the lives of others.

Mrs. Snell was also a member of the Relief Corps.

She leaves of her family seven of her children: Jennie, Mrs. Fay of McGregor; Cara and William, of Monona; Lawrence, of Minneapolis; Ethel, Mrs. Joe Blietz, of Monona; Emma, Mrs. McKenzy of Mason City; and David, of Buffalo Center. Twelve grand-children; and seven great grand-children.

So there passes from our midst one who has experienced through the years some hardships and some joys, one who was sustained by the truths of Religion; one who has earned her reward.

Funeral services were held at the Methodist Episcopal Church on Sunday, November 17, at two o'clock, the pastor of the Church, Reverend George W. Turner, officiating. A quartette composed of Miss Margaret Killan, Mrs. Delpha Thiele, Mr. Ernest Kaiser and K.W. Rash rendered "Saved by Grace" "Some Sweet Day" and "Beautiful Isle of Somewhere". Interment made in the family lot in the City Cemetery. 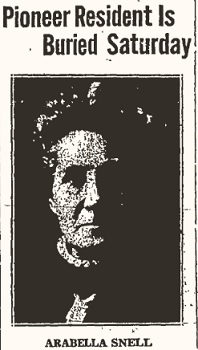