Services for Dean S. Mallory, 85 were held on Thursday, February 24, 1977 at 1:30 at the First United Methodist Church in Colesburg. Joint Church and Masonic services were conducted with Rev. Sam Irvin and Brother Virgil Wessel officiating. The Appleton Funeral Home of Edgewood, Ia. was in charge of arrangement, with burial in the Brown cemetery. Casket bearers were Louis Hartbeck, Lloyd Rentschler, Russell Schenke, Gordon Anderegg, Glen Anderegg, and Larry Holthaus.

He was born in Mallory township, Clayton County, Iowa and passed away at his home on Tuesday morning, suffering a sudden heart attack.
On October 18, 1911 He was united in marriage with Edna Every. Their entire life was spent farming on the original Mallory family farm.
He was a 65 year member of Constellation Lodge #67 A.F. and A.M. of Colesburg, Iowa. He was also a member of Minnehaha Chapter #344 O.E.S., York and Scottish Rite, and El Kahir Shrine of Cedar Rapids, Ia. He was a member of the Colesburg Methodist church.

Dean's life long hobby was recording the genealogy of his family, and other families who lived in Clayton, and Delaware County, Iowa. A copy of his large collection is in the Elkader, Iowa Public Library.

Services will be at 1:30 p.m. Thursday at the First Methodist Church at Colesburg, Iowa, with burial in the Brown Cemetery, near Colesburg. Friends may call at the Appleton Funeral Home in Edgewood, Iowa.

Mr. Mallory, a farmer, was born near Garber.

Surviving are his wife, Edna; a son, Bob, of rural Garber, and two grandchildren and six great-grandchildren.

The photo of Mr. Mallory appeared with an article about his family research in the Dubuque Telegraph-Herald, October 28, 1974. 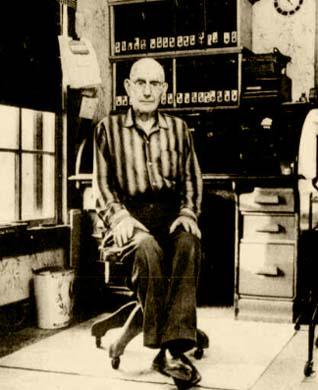