Mr. John Knickerbocker was born in Potter County, Pennsylvania, on the 14th day of May 1846, and died at his home in Edgewood, Iowa, Friday morning, March 31, 1911, after a lingering illness of paralysis of the bowels, being 64 years, 9 months and 17 days of age at the time of his death.

In early childhood he came with his parents to McGregor, Iowa, where he lived until married to Miss Harriet Fisher, the 22nd day of April, 1871, and to them were born six children, one of whom died in infancy.

Those living are Alfred I. Knickerbocker, Mrs. Sarah Richards, and Mrs. Lucy Alcorn, all of Edgewood, Iowa, Mrs. Effie Lash, of Randolph, Nebraska, and William, still at home.

In 1875 the deceased and wife moved onto a farm near Wood, Clayton County, Iowa, where they lived until 1905 when they moved to Edgewood where they have since resided.

Those besides the wife, six children, and seven grandchildren, who are left to mourn are four sisters, Mrs. Roane fisher, Mrs. Diana Ashline, Edgewood; Mrs. Hannah Shaw, Wood; Mrs. Susan Hamlett of Kansas; one uncle, Peter Knickerbocker, of Sawtelle, California, and one aunt, Mrs. Lucy Holcomb, in New York. All of these were present at the funeral except one sister, Mrs. Hamlett and the aunt and uncle.

We this it may be truthfully said that the deceased was a man who had no enemies and was liked by all.

The remains were tenderly laid to rest in the Edgewood cemetery. His presence has left us but his memory will long be cherished.

Dearst Father thou hast left us.
But the joys are thine to share.
"Tis the Savior that hast called thee
From this world of toil and care.

We shall greatly miss thee here.
But the Lord of all knows best.
Whom to call to heaven above.
To the realms of the blest.

But flowers that sleep 'neath the winter's snow;
A loved one lost to us below;
The voices hushed that used to sing;
We'll find them all where Christ is king.

Oh home of beauty, free from sorrow:
Oh everlasting glad tomorrow.
Faith swings the pearly portals wide
And calls me to my Father's side.

Card of Thanks
We wish to express our sincere appreciation of the many acts of kindness extended by friends and neighbors to our dear husband and father during the closing days of his peaceful life, for the sympathy and helpfulness which have since been so freely given to us during our sad bereavement, and also for the beautiful floral offerings.
Mrs. J.A. Knickerbocker and children. 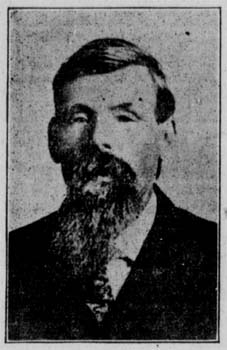