Many of our citizens who have had the pleasure of meeting Captain John Tapper, father of Wm. Tapper of this county, will receive with sadness the news of his death which occurred at the home of his son, Frank at Villard, Minn., last Saturday at 4:20 o'clock p.m. The following is a brief sketch of his life.

Captain John Tapper was born in East Orchard, Dorsetshire, England, March 25, 1820, and is consequently 88 years old. His father and mother were English and he was one of ten children, there being six boys and four girls in the family.

The departure of one of his brothers, the eldest, for America, in the thirties, led to the captain's coming to America in 1840. He took passage from London to Mobile, Ala., in the sailing ship, Mary land [sic], which was in the cotton trade, and landed at that city after a passage of fifty-four days. From Mobile he went by water to New Orleans in the steamer "Swan," arriving there in November, 1840. He again availed himself of a steamer, the "General Worth," at New Orleans to reach St. Louis, and after a brief stay got aboard the "Nauvoo" which took him to Prairie Du Chien, Wis. His objective point was Fort Atkinson, Iowa, which was then in process of construction, where his brother was employed.

The captain helped to build the fort, driving a six-mule team most of the time until he left in 1842 for Fort Crawford at Prairie Du Chien, where he again entered the service of the government as a teamster, filling that position until 1844.

The spring of 1844 found him installed in Fort Snelling as a teamster, still in the employ of the government. In 1846, the breaking out of the Mexican war gave him more strenuous employment. Dr. Seth Turner, the surgeon at the fort, father of Mrs. F.A. Dunsmoor, was ordered to the seat of war in Mexico, and was accompanied by Captain Tapper in a capacity similar to that which he had occupied at the fort.

He returned from Mexico at the close of the war, in the fall of 1847, and made Fort Snelling his home until 1848, when he took charge of the ferry which had been installed by Franklin Steele on the Mississippi river between Nicollet Island and the west side of the Mississippi, the landing at the latter point being where the steel arch bridge is now located.

Mr. Tapper assisted in erecting the first house ever built in Minneapolis on the west side of the river and he planted a garden where now stands the Union depot.

~Kanabec County Times, March 12, 1909 - transcribed by the contributor from an image of the original obituary posted on Find-A-Grave

Capt. John Tapper, the old government teamster, died at the home of his daughter in Minneapolis* last Friday in his 88th year. Mr. Tapper was for many years a Monona resident, and in the early days few men throughout this section enjoyed wider acquaintance than he.

The 'Monona Leader' in its last issue contains an extended obituary of Capt. John Tapper, who died March 5th, 1909, at the home of his son Frank, at Villard, Minn., aged 88 years, 11 months and 5 days. The funeral was held at Minneapolis on the 9th under the auspices of the Masonic fraternity.

Note: More than likely, the obit appearing in the 'Monona Leader' is the same or similar to the obit from the Kanabec County Times (above)

A related newspaper article about Capt. Tapper, from the 'Postville Review', July 19, 1907:

An Old-Timer Here
Capt. John Tapper of Minneapolis, was in Postville last Saturday, the guest of W.C. McNeil. Mr. Tapper is an old time resident of Monona, to which place he came in 1840, and for a number of years was a government teamster between McGregor and Fort Atkinson.

He assisted Joel Post in building his first log cabin in Postville in 1841. The Capt. is now 88 years of age, but is as physically strong and active and keen mentally as many men of half his years, and it is enjoyable indeed to get the captain in a reminiscent mood and listen to his stores of the "old days in Iowa," before there were any trusts to tame or railroads to regulate, or automobiles or Dan Patch air lines were elligible to entry in the pipe dream class.

Before returning to his home in Minneapolis, Mr. Tapper purposes to set two historical posts. One on the site of Sodom and one on the site of Gomorrah, two notorious booze joints of the old teaming days, located near Luana.

Also about Capt. John Tapper, from Chapter 19, Franklin Township, in the "Past & Present of Allamakee County, Iowa", 1913:

...in July, 1907, Capt. John Tapper of Monona, an old government teamster of those days, drove some iron pegs to designate the respective spots as he remembered them. From the 'Monona Leader', of a date in July, 1907, these quotations are made:
"Capt. John Tapper first set foot on Monona soil in 1840 and in the fall of 1841 and a part of the year of 1842 was a teamster in the employ of the government between Prairie du Chien and Fort Atkinson, transporting military supplies, so that he became familiar with the locality and well acquainted with the people along his route of travel over the old military road. He was for many years a resident of Monona township, conducting a farm two miles east of Monona. As he was familiar with Minneapolis, St. Paul, St. Anthony Falls and Minnehaha Falls all through their early period in the '40s, so he became familiar with this section in its earliest pioneer days, and in relating the story of the settlement of the country has proven time and again the accuracy of his statements, in the naming of persons who took an active part in the destiny of this great west country, and in locating prominent points of material interest to historians. For a man of his age, now past eighty-eight years, he is still robust, healthy, active and energetic, and if put to the test, would no doubt run a foot race, leap the hurdle, or wrestle with his even weight, and be the victor in each bout."

There are two midwest memorials to Capt. John Tapper, a statue in Minnesota and a tree in Iowa. A Minneapolis park statue names him as the builder of that city's first home and operator of its first ferry. The tree is an 86-year-old larch shading Miss Emma Zirgler's home in Monona. Captain Tapper came from England to New Orleans in 1840, up the Mississippi to McGregor's Landing, and then inland to take up land near Fort Atkinson. Later he moved to Minnesota. In 1865 he revisited England and brought back a tiny European larch sapling, hoping the hardy wood used in ship building by his English relatives might flourish here. It did. The captain gave the tiny tree to Clayton county's Judge Charles Dean who planted it on land he owned at Monona. Now 70 feet tall, the tree was recently marked with a bronze tablet by the Monona Garden club.

Note: The tree was cut down in 1974 when it was almost 110 years old. The Northern Clayton County Garden Club had placed a small bronze tablet on the trunk of the Larch tree which read "May this tree be preserved from the enjoyment of future generations." The tablet is now at the Monona Museum. It marks three evergreen trees on the museum lawn that were planted by the garden club - 'Monona Leader', unknown date

The photo is from the 'Postville Review' August 9, 1907. It didn't reproduce well on microfilm, but it's better than nothing! 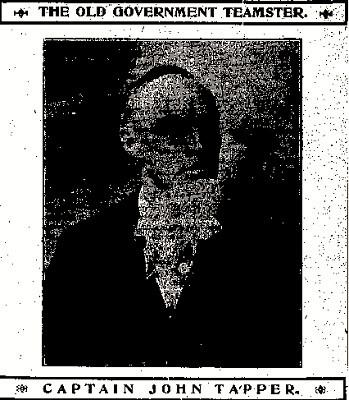