Ivanelle Ann Sauer, 82, McGregor, Iowa, passed away on October 26, 2013, surrounded by her family at the Prairie du Chien Memorial Hospital in Prairie du Chien, Wisconsin. She was born on April 25, 1931 in McGregor, Iowa, as the daughter of the late John E. and Azalia C. (Rubendall) Corlett. Ivy graduated from McGregor High School in 1949.

Ivy loved her community and dedicated most of her life to serving others in it. Ivy was instrumental in and was an active member in various organizations including the American Red Cross, Girl Scouts, the Headstart program, Amvets, The McGregor Achievement Club, The McGregor Rescue Squad, and the American Legion Auxiliary. She held many positions in the community, both paid and volunteer. Ivy dispatched for twenty plus years for Agri Industries, later Cargill.

Ivy is survived by her five children; two from her first marriage to Robert D. Heer of Dubuque, were Julie (Heer) Mansfield of Prairie du Chien, married to Charles Mansfield Sr., mother of Nathan, Jeremy and Jesse Toberman and Valerie Heer of Mountlake Terrace, Washington, married to Michael Cooksey, mother of Rachel Cooksey.
From the union with Chuck Sauer were: Martha Sauer of Marquette, Iowa, Angie (Sauer) Soulli of Marquette, married to Jim Soulli, mother of Chad Soulli and Jodi Johnston and Tom Sauer of McGregor, married to Charlene Wiskus, father of Zachary and Isaac Sauer. She was recently blessed with two great-grandsons, Connor Joseph Soulli and Jace Ryan Johnston. Ivy has one surviving sister, Jean (Corlett) Wolter of Luana, Iowa and a sister-in-law, Connie Corlett of McGregor.

Ivy enjoyed people as much as everyone enjoyed her. She will be greatly missed by her family, her friends and her community.

Visitation will be Friday, November 1, 2013 from 4 - 8 p.m. at the Thornburg-Grau Funeral Home and Cremation Service, McGregor, Iowa and one hour before services on Saturday at the funeral home.

Celebration of Life Services will be at 11 a.m. on Saturday, November 2, 2013 at Thornburg-Grau Funeral Home and Cremation Services, McGregor, Iowa.

Inurnment will be at Pleasant Grove Cemetery, McGregor, Iowa.

Thornburg - Grau Funeral Home and Cremation Service of McGregor, Iowa is helping the family with the arrangements. 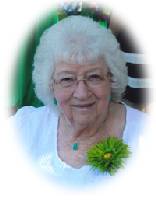