Iowa GI Dies.
Washington (AP) - The death in Vietnam of Army Pfc. Merlin E. Miller of Guttenberg, Iowa, has been announced by the Defense Department. The department said Pfc. Miller's death did not result from hostile action but gave no details. He was the son of Mr. and Mrs. Walter H. Miller of rural Guttenberg.

Funeral services for Merlin Miller, who lost his life on September 29 in a helicopter accident in Vietnam will be held this Friday at 2:00 p.m. at the Guttenberg Methodist church. The body will be brought here on Thursday it was learned.

Army Private First Class Merlin Miller, son of Mr. and Mrs. Walter Miller of rural Guttenberg, lost his life September 29 when he was struck by the tail rotor of a helicopter in a landing zone in Vietnam.

Notification of the death was received by his parents on Thursday of last week.

At the time of his death, Miller was assigned to the 25th Infantry Division in Vietnam, where he had served since September 7.

The family was notified that Miller's body would be flown home with a military honor guard. It was thought that arrival would be sometime this week.

Merlin was born October 2, 1949, at Guttenberg and attended school here. His mother is the former Edith Ferguson.

Funeral arrangements were not announced, pending arrival of Miller's body.

(Note: A picture of Merlin in uniform appears with the obituary, but did not reproduce well enough to be shown here.)

A second obituary appears in this issue of the newspaper, essentially the same as the 10 October 1968 obituary, from which is learned:

Funeral services were held last Friday from the Guttenberg Methodist Church, conducted by a military chaplain from Waukon.

Burial was made in Guttenberg City cemetery with military rites, the pallbearers being members of the United States Army.

Mrs. Donna Mae Balk is the wife of Jerry Balk.

Merlin enlisted in the United States Army on March 25, 1968. 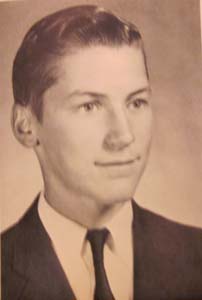