Marine From Iowa Killed In Vietnam.

Services for Marine Cpl. Matthew A. Ruden, 20, will be at 10 a.m. Monday in the church of the Immaculate Conception at North Buena Vista, Ia. The Rev. Carl Ruhland will officiate.

Friends may call after 2 p.m. Sunday at Behr's in Dubuque.

Cpl. Ruden died Nov. 3 in Vietnam of wounds received during an air strike. He joined the Marine Corps on June 16, 1967, and was wounded earlier on July 25, 1968, receiving the Purple Heart at that time.

He was born near North Buena Vista, son of Raymond and Nora Hefel Ruden. He was graduated from Guttenberg (Ia.) Community High School in 1967.

Surviving are his parents; two sisters, Mrs. Charles (Lou Ann) Hess of North Buena Vista and Mrs. John (Janet) Goebel of Colesburg, Ia.; by Clark Hefel, a cousin who resided with the family; his grandmother, Mrs. Margaret Hefel of North Buena Vista, and by aunts and uncles, nieces and nephews.

The Rosary will be said at 8 p.m. Sunday.

Matt, as he was called, was raised on a farm near, and buried at, North Buena Vista. He graduated from Guttenberg Community High School, Guttenberg, Iowa, with the class of 1967. The photo is his graduation photo from the school yearbook.

A photo of Matt in uniform was printed in the Dubuque Telegraph-Herald along with the 2nd obit (above). This photo can be viewed with his entry on the Clayton County Vietnam Honor Roll. Click the link below.

Matt has an entry on the Vietnam Memorial Wall, at that website, for further information. 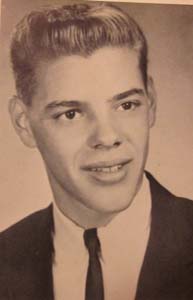