Special to the Gazette. - Monona - Mr. and Mrs. Lester Holly of Monona were notified Wednesday by the defense department of the death of son, Clifford, in Korea. No details were given.

Clifford, 20, entered the army June 3, 1952, and landed in Japan on Christmas day of that year. A few days later he was sent to Korea where he has been since.

Monona- Body of Clifford Holly will arrive in Monona at 2:30 a.m. Monday and services will be held Tuesday at 2 in Monona Methodist church.

Holly, drowned July 2 in Korea while serving with Co. B. 4th Signal Battalion, was putting up telephone wires at the time. 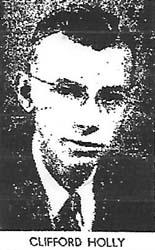