According to word received here by his aunts, Miss Faye Connell and Mrs. Bernadette Persho, with whom he made his home for 14 years. Cpl. Connell was killed May 3 while serving with the 51st signal battalion.

Just two days before his death was reported, his aunts had received a letter from him saying that he expected to leave Korea soon and hoped to be home sometime during the summer. He said he wanted to play baseball with the Twin Cities team in a game or two while on furlough.

Born Sept. 5, 1928, in Marquette, Cpl. Connell was graduated from Marquette high school in 1948 and entered the army in February, 1951, following two years employment by the Milwaukee railroad.

After four months training at Fort Campbell, Ky., he went to Japan where he spent 14 weeks. Since then he served in Korea.

Survivors include his mother, Mrs. Elizabeth Gallagher of Dubuque; two brothers, Kenneth, of Marquette and Robert, of Dubuque, and two sisters, Mrs. Paul Megonigle and Helen, both of Dubuque.

-- Note that the submitter is not related.

The body is scheduled to arrive here early Saturday morning.

"Mickey" was killed in action in Korea on May 3rd. This is the first fatality of this community in the Korean conflict.

A son of Elizabeth Gallagher Connell and the late Frank Connell, he was born in Marquette on September 5, 1928. After the death of his father, he made his mone with his aunts, Miss Maye Connell and Mrs. Bernadette Presno.

He graduated from Marquette high school in 1948 and was employed by the C.M. St. P. and P. railroad until he entered the service in February, 1951. He went overseas four months later and spent 14 weeks in Japan before going to Korea. He was in the 51st Signal Battalion.
~North Iowa Times, Thursday, July 3, 1952. 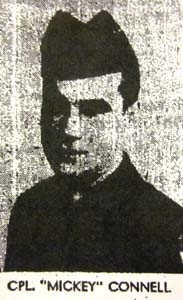