That Milton Voelzke, 26, came to his death as a result of an automobile accident was the decision reached by a Clayton county coroner's jury at a hearing held in the City hall Monday morning, for the purpose of investigating the highway crash which took two lives and seriously injured other young persons early Saturday morning.

The other victim was Harley Ferguson, 17, son of Mr. and Mrs. Robert Ferguson. He suffered a skull fracture and had two bones in the left arm above the wrist fractured. He died from the injuries Saturday afternoon at 2 o'clock in the Postville Hospital.

Ruth Ferguson, 20, and Isabella Ferguson, 16, sisters of Harley are in the Postville hospital. Ruth suffered a fractured vertebra and other body bruises. Isabella received a cut over the right brow, a brain concussion, and small lacerations below the knee. Lyle Voelzke, 19, received bruises and abrasions about the face. George Hertrampf, 35, is suffering from body bruises and shock and is confined at the home of his sister, Mrs. Ray Peters. Outside of minor scratches, Edith Ferguson, 15, escaped injury. The accident occurred about 1:30 o'clock Saturday morning. The automobile driven by Hertrampf left the highway, a mile east of Luana, and crashed into an electric line pole. The group was returning from a dance held at Luana. 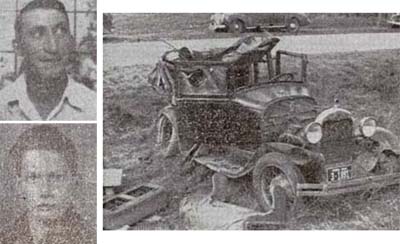