She was affiliated with the Methodist Church, attended two years of college and was a school teacher.

On August 27, 1925 she was married to Dr. C. C. Kimpston. He passed away on February 20, 1968. She is survived by her daughter, Joan Patterson, Cedar Rapids, one son, Charles Kimpston, Woodward, Iowa, seven grandchildren, 4 great-great grandchildren, and one sister, Lavera Fink, Strawberry Point.

Interment was at the Strawberry Point Cemetery. Roberson Funeral Home was in Charge of arrangements.

Source:
~Obituary was found at the Strawberry Point Public Library 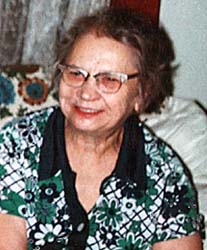