Red Cross Worker Dies of Disease in France
Mt. Vernon, Iowa, Jan 8 - Cornell college has added another gold cross to its service flag representing the sacrifice in the death of Elsie May Hatch of Edgewood, Iowa, who died of bronchial pneumonia in Paris, on December 20, where she has been engaged in Red Cross work for several months. Miss Hatch received her secondary education at the Edgewood high school, Edgewood, Iowa, and Lenox college academy, and spent the first two years of her college course at Lenox college, transferring at the end of her sophomore year to Cornell college, Mount Vernon, Iowa, where she spent her junior and senior years, graduating in 1910. A telephone message from Edgewood to President Flint announced the sad news last Saturday and the family have requested President Flint to join with them in an effort to get permission to bring the body back to America for interment. 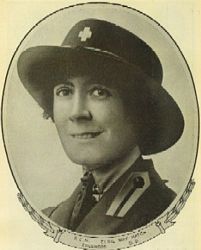