Source; Monona, IA newspaper
MONONA YOUTH DIES IN HIGHWAY MISHAP
Monona, Ia - Edward Carl Oelke, 19, son of Mr. and Mrs. Gaylord Oelke, of Monona, was instantly killed about 11:30 p.m. Tuesday when the car he was driving went out of control and overturned on highway 52 about a mile south of here.

According to Clayton county Coroner, E.W. Tuecke, of Garnavillo, who investigated the accident, Oelke overtook and passed a car driven by a Mr. Meyer of McGregor, and his car went out of control on the shoulder of the road. His neck was broken and his skull fractured, the coroner said. The car was badly damaged. Both cars were southbound out of Monona.
___
Note: DOB Oct. 11, 1929 & DOD Mar. 15, 1949.

Added by Reid R. Johnson 1/31/2016 - another obit & the photo of E.C. Oelke from his gravestone in the Farmersburg-Wagner cemetery.

Edward Oelke, 19, of Monona was killed at about 11:45 Tuesday evening when his car went out of control on a curve about a mile and a half south of Monona on Highway 52. He was Clayton county's first traffic fatality this year.

Sheriff Forest M. Fischer and Coroner E. W. Tuecke were called to the scene of the accident.

The young man was the son of Mr. and Mrs. Gaylord Oelke of Monona and a grandson of L. J. Palas, Elkader. He is survived by his parents and one
brother, Gaylord D. Oelke.

Funeral services for Edward Carl Oelke, 19, were held Saturday afternoon, March 19, 1949, at 1:45 o'clock from the residence, and St. Paul's Lutheran church at 2 o'clock with the Rev. R. C. Schlueter officiating. Burial was in the Farmersburg cemetery.

He died Tuesday evening, March 15, at 11:40 o'clock when his automobile left the highway 1 1/2 miles south of Monona on highway 18 and 52 while going home from a birthday party at the Clarence Bernhard home.

He was a son of Mr. and Mrs. Gaylord C. Oelke, born in Giard township, Oct. 11, 1929. He moved with his parents to Monona in 1944. He graduated from Monona high school in 1947. At the beginning of March this year he took over the operation of one of his father's farms.

He is survived by his parents, and one brother, Gaylord; his maternal grandfather, Louis J. Palas, Elkader; and paternal grandmother, Mrs. Mary Oelke Bruns, Monona.

Music at the service was provided by Donald Sabbann, soloist, accompanied by Mrs. R. C. Schlueter at the organ. 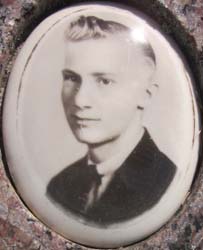