Elmer and Hilma met at a barn dance near Gunder when we were kids, says Elmer. They were married September 27, 1918, in Hilmas family home near Farmersburg. Her father was Carl Radloff.

Elmer and Hilma began farming in 1919 northeast of Farmersburg. They were diversifiedwith pigs, cows, chickens, corn. They butchered and smoked their own meat. They also tanned their own hides.

The two worked hard, but that was the life they knew. We were brought up to live that way. We never thought anything of it, Remembers Hilma.

The Lenths have three childrenGretchen, Clifford and Janet and they helped on the farm while they were home.

They farmed, and survived, through the Great Depression. Elmer remembers 1929 to 1934 as the bad years. The family had to eat dry bread because they couldnt afford butter. We did without a lot of things to hold the farm. Elmer and Hilma agreed.

But Elmer, who seemed quite serious when talking about farming, and who said he ran his operation like a business, will never forget the day he made his final farm payment. When we got the farm paid for I signed no more notes after that!

Hilma and Elmer remember 1943 as the year electricity came to their farm. They said they didnt need to use a lantern anymore and within a few years, Elmer put a motor on his cream separator. They did not enjoy indoor plumbing until they moved to Monona 30 years ago.

There were few arguments over the years, but there were some sad times. Hilma especially missed the farm at first, after they moved off January 1, 1958. The hardest she remembers crying was when they were still living on the farm. She discovered that most of the 104 baby chicks she was raising at one time were eaten by a rat. Hilma was fond of raising chickens, and this was a hard thing to take.

There were good times toobirthday parties, barn dances, card parties, good neighbors. When they left the farm, the Lenths neighbors threw a surprise party for them.

There were even more surprises than just a surprise party. Elmer will never forget the day he lost his wedding ring and found it later at a mind readers suggestion! He recalled having the ring on at a masquerade party in Farmersburg. After this, it was lost. Later, there was a lady mind reader in Farmersburg as part of a medicine show, he remembers.

On a chance, Elmer asked her where the ring was. He was told it was in some straw at Hilmas fathers farm. Later he went to look  and there it was!

The Lenths still kept busy after they sold the farm. They did a lot of upholstery work, and people came from Chicago and Bloomington to get items upholstered. They still did upholstery work until seven or eight years ago when Hilma developed leukemia.

Today, Elmer, who got his first car in 1916, a Model T, still drives. He also tends a garden. The Lenths both still live in their own home and Hilda does some of the cooking. They also like to play cards.

The Lenths have seen a lot of changes in 70 years. From the team and walking plow to a man on the moon, Elmer observes. Hilma remembers when she washed clothes by hand.

Their family and friends will help celebrate their 70 years this Saturday, Sept 24, from 1:30 p.m. to 4 p.m. at the Farmersburg Community Center.

Their memories are so many, the Lenths say, that it is hard to pick out one favorite. Looking back through the years, Hilma observed, There were people a lot worse off than we were.

~This article came from Malida Radloff Schultz. I don't know the newspaper source of the article. Elmer and Hilma were married September 27, 1918.

Submitted by Renae Hodgin. Hilmas dad Carl was a brother to my grandfather Frederick Radloff. 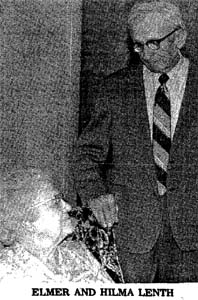