She was honored at a family dinner at her home Sunday. Mrs. Sherman is one of Monona's oldest residents, a lover of flowers and fancywork, and a constant companion of her daughter, Blanche, who resides with her.

As Alice Murphy she was born at Hamilton, Ind. At the age of 7 she came with her parents to Clayton county, making the trip in a covered wagon. En-route she sat beside her father on a small stool which she still has in her possession.

She was married in 1878 to Theodore Sherman, who when 16 years old ran away from home and enlisted for the Civil war in Company L, Sixth Iowa cavalry. He spent two and a half years fighting the Indians in the Dakotas.

Following their marriage they made their home on a farm in this vicinity, later coming to Monona, where Mr. Sherman became a building contractor. She became the mother of two children, Frank, who died in 1914, and Blanche. She has one grandson, Frank Sherman, and two great-grandchildren. Her husband died in 1910.

Note: Mrs. Sherman died in February 1945 (her obituary is posted on the Obituary Board) 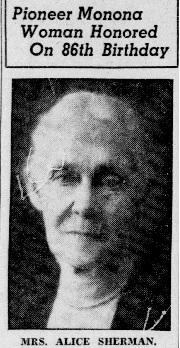