Mrs. Frances Haworth, one of Monona's oldest citizens, celebrated her 87th birthday Sept. 10, 1935. She was born in Elkhart ,Ind., in 1848, and came to Monona with her parents when nine years of age. She was a daughter of Wm. and Elizabeth Randall, early pioneers of Monona.

She married John Haworth, a Civil War veteran, who died many years ago. She has three daughters living: Mertie Mitchell, Edith Walters and Edwina Parrish, 12 grandchildren and ten great-grandchildren.

Mrs. Haworth is in remarkably good health for her age, and does her own housework. She has lived to see Monona grow from a few scattered homes to one of the prominent towns in northeastern Iowa, and recalls many interesting events of early pioneer life.

~Clayton County Centennial Edition, July 1936 (the photo, which did not reproduce well on microfilm, accompanied the birthday article) 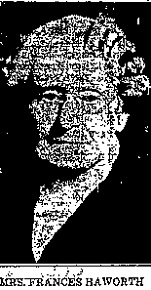