Frederick Virgil Mershon was born July 14, 1873 in Glenwood, Iowa, the second of three sons, to Charles and Julia White Mershon. When Fred was 4 ½, his father drowned on a vacation trip with friends on the Missouri River, leaving his mother to support and raise three sons by herself.

Freds father Charles, was a member of the Glenwood Dramatic Association. Hearing stories about his father may be where Fred got his desire to become an actor or perhaps it was in his blood; in any case, Fred left Glenwood at 18 years of age to become an actor. Around 1894-1895 Fred lived with his widowed grandmother in Des Moines Iowa, working as a waiter and plumber while getting his career started. By age 27, he was well on his journey. His given occupation was now actor. When he visited the town of Mc Gregor, Iowa he met my grandmother Cresentia Sauncey Endres. He got her started acting with him, and on September 22, 1900, they were married on stage in a double wedding with two other members of their acting troupe after the evenings performance in Waukon, Iowa.

My grandmother kept a very large scrapbook of their days on the road. The many newspaper articles that she saved attest to my grandfathers superb talent as a comedian and actor. He played all of the leading roles in musical melodramas of the time and was celebrated in every article. Phrases such as The favorite of the house, Unquestionably the star of the company, exceedingly clever and the best leading man that has appeared in these parts were written in articles from all over the U.S. My grandmother didnt do so bad herself, as her abilities were frequently mentioned in a flattering way.

Piecing together the information from the articles, the biggest production Fred starred in was Kilroy and Brittons The Cowboy Girl in 1906. This production opened in Chicago and then toured all of the largest cities including New York City, Washington D.C., Philadelphia, and St Louis. This production, although none of the actors, is mentioned in the book The American Musical Theater by Gerald Bordman. Fred worked along side well-known vaudeville actor and singer Ray Raymond, as well as Julia Rowland and Pearl Hazelton. Besides his wife Sauncey, Fred engaged his brother Claude and his wife Anna in the theatrical life. They lived in Reno, Nevada as Frederick helped his brother Claude run his bicycle shop (chasing off burglars with guns) and also assisted with theatrical productions put on by the Reno Wheelmen of which his brother Claude was a member. Although most of Freds career was with various stock companies including the Warner Comedy Company, Chase-Lister, Harvey Stock Company, around 1907 he created his own company the Mershon Stock Company. He composed songs and wrote plays and in 1908 returned to his hometown of Glenwood to do a show.

The Mershon Stock Company, billed to appear at the Glenwood Opera House Monday and Tuesday March 9 and 10 is owned and controlled by F.V. and C.R. Mershon, old time residents of Glenwood. The company, beyond a doubt is one of the strongest organizations on the road

Mr. Mershon has played 85 different characters and has no superior in the leading role of the companys opening bill, The time The Place and The Man a big musical comedy. Special attention is called to the musical numbers in the play. The song entitled The Time, The Place and the Man is written by F.V. Mershon, music by Dick Bertram. The Mershon brothers give a guaranteed attraction

The summer of 1915 would mark his last curtain call. His last known performance was on the Mississippi River showboat Wonderland that traveled the ports of the Mississippi bringing musical melodrama to people who lived along the way.

On November 10, 1915 Frederick died at the age of 42 of heart disease at his home in Mcgregor, Iowa. He was preceded in death by his father, his two brothers, and a beloved son. He and his infant son Claude are buried at Pleasant Grove Cemetery, Mc Gregor, Iowa. My grandmother had lost the love of her life and she never remarried.

As children, my sisters and I, as well as our cousins, played with the old costumes, masks and grease paint of the Mershon Stock company. The old scrapbook, costumes, playbills and stage props kept by my grandmother for many years, allowed us a glimpse into the extraordinary life that was my grandfather s. 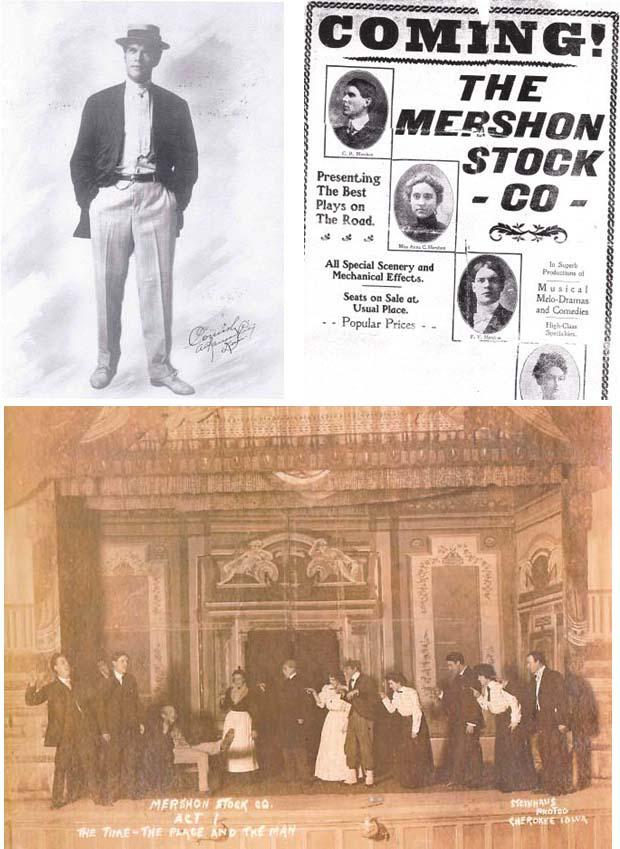