Ruegnitz, Hon. Charles, was born at Waren, Mecklenburg-Schwerin, Germany, January 12, 1849. His parents were born near the same place. In 1864, with their ten children, seven sons and three daughters, they came to the United States and direct to Clayton, Clayton county, Iowa. The voyage across the Atlantic, from Hamburg to New York, was made on a sailing ship, and lasted seven weeks. When out at sea four weeks the youngest daughter, one year old, died.

Charles attended the common schools from his 6th to his 14th year, when he went to work as apprentice in his father's cooper shop. During the time, he took advantage of the Mechanics' school, held at night, where he received special training by competent teachers without cost. After coming to the United States, in 1864, he worked at coopering until 1868 in Clayton, at which time he went to Minneapolis and Stillwater, where he followed the same trade.

In 1870 he joined a party to go to the gold fields of Montana, but on reaching Omaha gave up the trip, the reports being unfavorable. He remained in that city a short time, when he entered the employment of the Union Pacific railway and worked on the sections at Alkali and Julesburg until fall. He then returned to Omaha and secured employment on the bridge across the Missouri, then in course of construction, where the next few months of his life was spent below the bottom of the river, in the cylinders wherein so many men parted with health, if not life.

In 1871 he returned to Clayton county and again engaged in coopering, serving as foreman for Krueger, Werges & Company. In 1874 the Northwestern Hoop company, of Chicago, erected a factory at Clayton, which was provided with all the improved machinery for manufacturing hoops and box straps, and Mr. Ruegnitz was given charge of the concern, which he conducted for seven years. At the end of that time he engaged in business for himself, which he continued for three years.

Although never having had an opportunity to attend school in this country, he was possessed of a good education, self-earned, and to that was added the thorough and more desirable knowledge which is obtained by practical experience. He held the office of township clerk for several years, and was justice of the peace and a member of the school board. In 1884 he was elected county treasurer, which honored position he now fills. If this were not enough to show the high esteem in which he is held, both as a citizen and a public official, it might be added that in 1892 he received the nomination for state treasurer on the democratic ticket, but was, of course, defeated, owing to the republican party being in the ascendency.

He was married in 1872 to Miss Emma Venus, who was born in Clayton county in 1852. Her father, Joseph Venus, a Bavarian by birth, was one of the original thirteen who founded the German Colony Communia in this county in 1847. They have three children, Emma, Fritz and Louis, all of whom have been reared in the Lutheran faith. It must not be omitted that, although always a democrat, Mr. Ruegnitz is an ardent supporter of the gold standard as against the free coinage of silver. He was a charter member of Clayton Lodge 143, A.O.U.W.; of Mystic Camp 319, Modern Woodmen of America, and member and president of the Elkader Turn-Verein and its gesangs (singing) section. 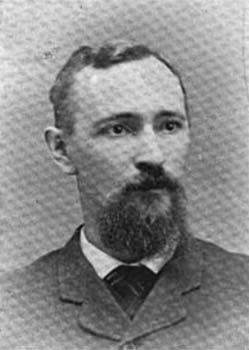