Thompson, Francis Marion, of Rock Rapids, is a brother of J.K.P. Thompson, whose sketch is included in this work, so his ancestry need not be repeated. He was born in Carey, Ohio, October 11, 1842, attended school with his brother, and came with his parents from Ohio to Clayton County, Iowa, in 1857. He was taught music by his mother, and at the age of 15 could read music better than print. Later he was under the instruction of George F. Root, of Chicago. From his 15th year he devoted much of his time to singing and did evangelistic singing after he was converted and admitted to the church. He was prominent in church and Sunday school work until he, with his brother, enlisted in the Twenty-first Iowa Volunteer infantry, August 15, 1862, preferring this to going to college. The regiment was commanded by Col. Samuel Merrill, and was in many engagements, among them those of Hartsville, Mo., Milligan's Bend, Vicksburg campaign, bombardment of Grand Gulf, Port Gibson, where General Grant highly complimented the regiment on being the first in and the last out of the fight, Champion Hill, Big Black River Bridge, and other engagements. In the last named fight Mr. Thompson was one of those who carried Colonel Merrill off the field when he was wounded. He was never hit but once and that was by a spent ball which struck his toe and did him no harm. The regiment afterward went through the Texas campaign and Mobile campaign, and up the Red river and was present at the surrender of Gen. Kirby Smith. While in camp at Dauphin Island at the mouth of Mobile Bay he was afflicted with trouble with his eyes, which became rapidly worse and resulted in almost total blindness. In the fall of 1865 his old colonel interested himself in the soldier boy who had helped to carry him off the battlefield, and sent him to Chicago, where he was for eleven months under the treatment of a celebrated oculist. His right eye was taken out and his left eye partially saved, so that he saw with the use of an artificial pupil, using a very strong glass. During the time he was entirely blind the government gave him a pension of $8 a month, which increased from time to time until in 1893 he was receiving $72 a month, but Hoke Smith, then secretary of the interior, had this pension reduced to $30 a month.

In 1875 Mr. Thompson went to Rock Rapids and the next year opened the first agricultural implement establishment in the town. He soon traded for a farm near town, but the grasshoppers destroyed everything and he returned to town and went into the drug business with George C. Wood. He objected to selling whisky, so his partner sold out to J.M. Webb, and for the same reason Mr. Webb sold out to Mr. Thompson. The business was a very successful one. The strain on his eyesight compelled him to retire from this business and in 1887 he took his family to California. Returning to Iowa he, with others organized the Doon Savings bank. In the spring of 1896 he and his brother, J.F. Thompson, together with others, bought a 1,000 acre tract of land near Sacramento, Cal., and were interested in building the Sacramento, Fair Oaks & Orange Vale electric railway. The Thompson family are republicans and F.M. cast his first vote for Abraham Lincoln in 1864. He is a past commander of Dunlap Post No. 147, G.A.R., in Rock Rapids, the post having been named after the lieutenant-colonel of his regiment, who was killed in the charge at Vicksburg, May 22, 1863. He is a past aid-de-camp on the department commander's staff and past assistant inspector-general on the staff of the commander-in-chief. He is a past master of Border Lodge No. 406, A.F. & A.M., past high priest of Lyon Chapter, Royal Arch Masons, and past excellent grand master of Third Vail Grand Chapter of Iowa, Royal Arch Masons.

He was married October 3, 1872, to Nettie Wiltse, daughter of Dr. A. Wiltse, of Strawberry Point, Iowa. They have had three children, Ella E., born June 5, 1878, who is especially interested in music and is a graduate of the Rock Rapids high school, and is now a student of Cedar Rapids Business college; Genie M., born August 11, 1880; Gertie V., born November 21, 1883. The family are all members of the Methodist church. 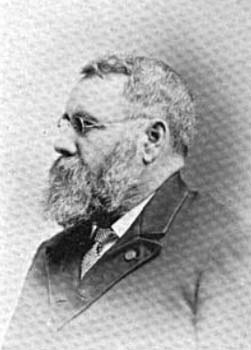