Patrick, James Perkins, a veteran of the late war, is one of the leading wholesale merchants of Des Moines. He is of Irish descent, his ancestors having come from County Tyrone in Ireland during the seventeenth century, settling at Quinton, N. J. His great-grandfather, Samuel Patrick, with his brother, Abner, served as privates in the revolution under Capt. William Smith, of Salem. Samuel was wounded in an action occurring at Quinton Bridge, March 18, 1778, and both were taken prisoner and lay for two years on board a British prison ship in New York harbor.

Mr. Patrick's father, Samuel Patrick, a farmer, was born near Youngstown, Ohio, in 1809, his parents having moved there from New Jersey the previous year. Here he grew to manhood, and was married in 1833 to Amanda Brown, whose parents were southerners, but who believed slavery to be wrong. Her father, in 1821, disposed of his property in New Orleans, and came with his family to Cincinnati, where he freed all his slaves, and then settled in Bellefontaine, Ohio, where he remained until his death in 1838. He served in the war of 1812. Mr. Patrick's father died in 1878 in Cass county, Mich.

J. P. Patrick was born at Bellefontaine, Ohio, October 27, 1836. He was brought up on a farm and secured his early education at the district school. In 1846, when he was 10 years old, he moved with his parents to Cass county, Mich. He came to Iowa in 1857, soon after attaining his majority, and settled in Fayette county, where he put in many hours of hard work to secure funds for acquiring a higher education. In 1860 he entered Upper Iowa university, but left school after a year to join the army, enlisting in Company F of the Third Iowa infantry. He served as a private until 1862, when he was promoted to the rank of sergeant. He was with his company during all its marches and engagements from 1861 to 1863, including the battle of Shiloh. He received a severe wound in the hip from a canister while on board the steamer Crescent City, in the vicinity of Vicksburg. He was taken to the hospital at Memphis, Tenn., and upon his recovery several months later was commissioned lieutenant of Battery F, Second United States Colored Light artillery, in which position he served until the close of the war, participating in many skirmishes and engagements in western Tennessee and northern Mississippi, the principal battle being at Guntown, Miss.

Upon his return from the war in 1866, Lieutenant Patrick began business as a general merchant at West Union, but after three years sold out and moved to McGregor, where he assisted in organizing a wholesale and retail hardware establishment, under the firm name of Drake, Dayton & Patrick. He did a good business here for twenty-three years, and in 1892 removed to Des Moines, and in partnership with Henry Luthe, established the wholesale hardware house of Patrick & Luthe Co., with which he is still connected, doing a large business with firms all over the state.

Mr. Patrick has always voted the straight republican ticket, but has not been an officeholder, further than serving as mayor of McGregor and as a member of the city council of Des Moines. He is not a member of any church, but his family attend the Congregational.

He was married March 8, 1870, to Miss Louisa M. St. John. Their family now consists of two children, Elizabeth B., born in 1874, and Charles C., born in 1879. Mr. Patrick takes just pride in the fact that in his thirty-two years of business experience in Iowa he has always paid 100 cents on the dollar, and has never been sued for debt. 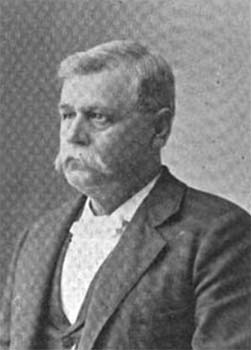