WHO'S MINDING THE STORE? SIGNS INDICATE IT'S NOT VIV - But give a hoot and holler and she pumps gab and gas .........
By Valerie Monson

Rossville, IA  Vivian isn't here right now, so if you need something, simply do what the locals do: Look for a sign. Or just holler. I'm up above the station mowing the grass, reads the handwritten square of cardboard perched in the window of the unattended store behind the switched-on gas pumps in this spot off the road in northeastern Iowa. If you need something holler at me. Ok. Ohhhhhhhh, Vivian! Vivian!"

Before the final syllable falls off your tongue, here she is, a 65 year-old bundle of joy, wanting to know how much gas you got because, you know, here in Rossville we believe you, honey. She lets you set the bills down by the cash register without even counting them because, well, this is Rossville, honey, and why don't you have a chair, and wouldn't you like something to drink? My goodness, this has been such a hectic day, what with all that mowing and running up to Vernon's mother's and baking cakes to take down to the church where they're fixing to have a 40th wedding anniversary, and it isn't even noon. So what will you have to drink? insists Vivian, opening up the store's fridge so you can have your pick. No, honey, you're not going to pay.

Vivian Huffman has been pumping gas, changing oil and probably giving away as many soda pops as she charges for since 1940 - -not long after she eloped with the dashing owner of Huffman's Service Station, who took a shine to young Viv when she would stop in for a Maple Hump candy bar on her way home from school. I think about those times a lot, says Vivian. She has to rely on those sweet memories because her husband, Vernon, the guy who coaxed her into marrying him when she wasn't supposed to, passed away last year. Together they ran this combination gas station-general store. Now it's Vivian who lives alone in their adjoining home and keeps the fuel flowing and conversation crackling in Rossville.

LOOK IN WINDOW
But Vivian's not here right now. So, to get your fair share of gasoline and gab, you'll have to look for her sign. I am working upstairs. If you need something come to the south door and holler. Since Vivian is the one-woman show here, and more active than a kindergarten round-up, she has made a whole collection of homemade signs for all occasions. That way, if she gets called away in a jiff, she can just grab the appropriate one and stick it in the window.

And if you can't wait around, just leave her a message in the mailbox outside. It's the one that commands, LEAVE A NOTE.

Vivian, see, does not want to miss out on any of the action. Action is Vivian's middle name. She just took her first plane ride, on which she so charmed the United Airlines crew that the pilot later posed for a picture with her and gave Vivian her own set of wings.

And that's not half of it. So much is going on that Vivian hasn't even had time to unpack. For one thing, there's the coming celebration at the roadside park just down the pike. The event will be dedicated to Vernon's memory later this summer when they get the plaque done. She still plays the organ every Sunday morning at the Rossville Presbyterian Church, looks in on Vernon's mother and wants to do something about those windows. There are apricot bars to be baked, gas to be pumped and flowers to be tended. And all that mowing. After medicine for Vernon's mother. Be back at 12:30.

PREVIEW OF FUTURE
Vivian grew up in Waukon Junction, near Harpers Ferry, Iowa, and got a preview of her future when the school bus stopped for gas and the kids piled out for treats at Vernon's station. She didn't think much of Vernon then - - after all he had six years on her. So, after graduation, Vivian became the teacher of all eight grades at the Waukon Junction Country school. Vernon found out. Well, he never said anything about a date, but he came down to see me at my parents' home and wondered if he could take me to a show, says Vivian. He had a 1940 Ford coupe. Shining black. Oh, yes. Vivian fell in love. So did Vernon. He asked her to be his bride. But my teaching contract said, 'No Married Teachers', explains Vivian. Yes, honey, that's how it was. But that Vernon, he already had Plan B hatched. Oh, yes. So confiding in only a couple of witnesses who crossed their hearts and hoped to die before they'd ever let on, Vivian and Vernon slipped over to a parsonage in Decorah, Iowa on an ice-blue winter day, promised to love, honor and cherish, celebrated over dinner in Waterloo and drove back to Waukon Junction, where Vivian continued to live with her unsuspecting parents and teach school until the term ended.

LIFE WITH VERNON
Then Vivian's life with Vernon began. If you need gas come down to the church and get me. We are painting the church. They moved the station down a block to its present location and kept the doors open seven days a week. Vernon was an avid outdoorsman, something you can pretty much guess from all the polished agates, arrowheads and an entire glass case of old duck decoys that decorate the store. He collected and collected and collected, says Vivian. He was just a collector. Which reminds Viv of their 42nd wedding anniversary. Would you like to see what she got Vernon? Of course. She brings back a little balsa Mallard with hand-brushed feathers of teal-blue and mud-brown, a yellow bill and a white band around the neck. Vivian made the decoy for Vernon out of a block of wood. It was her first one, and it's perfect. For an entire decade, she secretly whittled, carved, sanded, and painted. It took me a terrible long time to do it, marvels Vivian. I kept it hid in a drawer in a dresser upstairs. Vernon never bothered that. He always wondered what I was doing up there, but I just said I was cleaning. Vernon loved his decoy so much that he proudly displayed it on his desk in the store. Vernon and Viv didn't know at the time that there would not be many more anniversaries. A few years later, Vernon got sick. He was in such good shape until then, but... her voice trails off, ...you don't seem to have a chance with cancer.

Vivian started leaving signs in the window when Vernon needed her as he became weaker and weaker. She cared for him to the very day he died, two Februarys ago. During the summer, Vivian places a duck decoy on his grave.

And now I just don't know what I'm doing, honey, says Vivian. If I don't hear you, please holler. Vivian is thinking about starting another life for herself. She has already found a buyer for Vernon's decoys (no, she's not parting with that special one), and she's talking about eventually selling the store and home too. She figures she could always rent an apartment over in Waukon and take in some sewing, but she'll miss what remains of her little Rossville. Oh, there can't be more that 45 or 50 people here now, she says, Let me think...one, two, three, four, five...so many are widows. I guess, maybe, around 50 altogether, with the children.

Vernon and Vivian never had children. Still, on Mother's Day, Vivian always finds little packages and cards in her mailbox. Some of them are anonymous and simply signed With love. I had one from a woman who said, 'You don't have to bear children to be a mother, Viv,' says Vivian. I get lots of hugs. Everybody has been so good to me here.

And she doesn't have to look far to see Vernon's living legacy. Vernon, understand, planted trees like Johnny Appleseed. That grove across the street? He started all that. The row of firs and pines at the roadside park just before you get to the Waterville turn-off? He helped with those, too. In fact, Vernon and a friend, Walter Hagen, are responsible for that little rest stop a mile east of the station on Highway 76. The men rustled up sponsors, kept after the Department of Transportation until the park was approved and began sowing the saplings. Even when Vernon got sick and couldn't plant anymore, Walter took him out there and said, 'You've got to supervise,'says Vivian. That meant so much to Vernon cuz he could no more than dig a hole.

When Vernon died, Vivian decided to take all the cash donations and invest in a shelter house, picnic tables, and a barbecue pit for the park. Once the plaque is finished this summer, it will be dedicated to the memory of Vernon. I'm over at Vernon's mother's, if you need something, Across from the Sportsman Club. Vernon's trees still give Vivian comfort now that he's no longer here with a hug or a Maple Hump candy bar. When I get down or a little depressed, I take a can of pop and a sandwich and go walk in the woods, says Vivian, peeking over at Vernon's grove. I'll sit under a tree and listen to the birds and pick wildflowers.

Sorry, had to leave. Vivian's not here right now. She may have packed a little snack and gone off to the woods. Maybe to listen to the birds. Or to pick some wildflowers. Or simply to remember shining black Fords and Maple Hump candy bars. She'll be back soon. So hold your horses; enjoy the day and set a spell. Or just holler.

~Des Moines Register, June 5, 1987 (story & photos below)
____________________________________________
Personal recollections from the contributor:
Vivian Huffman was well known not only in Allamakee County but in many other places! She made you feel special -- no matter who you were -- friend or stranger. She had me playing a piano solo at church for the offering from third grade through 7th grade -- 7th grade through my senior year, she had me playing the organ as her substitute or singing a solo or singing with our big choir of 3 other kids (who bailed out by the time we were freshman). To this day I am a church organist and I guess I can blame Vivian. I can hear her now, "Oh, Honey, don't do too much!" Vivian retired from playing the organ after 50 years and because they could not get anybody else, she played for another 10 years for sure! Yet, with all of her activities in life, she ended getting Alzheimers and passed away in the spring of 2011. I wish I had a recording for all of the stories that were told about Vivian at her funeral! Every single one was true, so much like Vivian, and there wasn't a dry eye in the house -- not from sadness, but from laughter! She was notorious for speeding and many a time was she stopped by a highway patrolman!
....Connie
______________________________________________
Vernon's obit:
http://iagenweb.net/boards/allamakee/obituaries/index.cgi?read=321665
Vivian's obit:
http://iagenweb.org/boards/allamakee/obituaries/index.cgi?review=336776 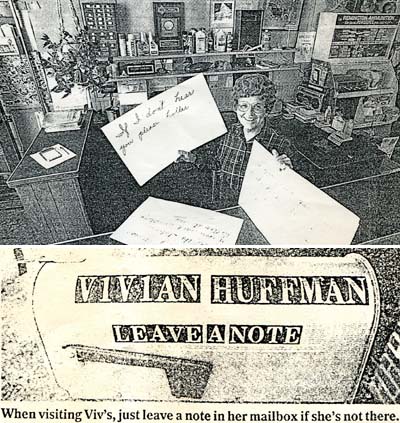