J.C. Ryan is perhaps as well known to the Democrats of Dakota as any other in the ranks so young and so short a time in the territory, since the time he showed his courage and loyalty to the party at the Aberdeen convention two years ago.

Mr. Ryan was born in Allamakee county, Iowa in 1852, and is therefore thirty-six years of age. Before he became of age he was appointed deputy clerk of the district and circuit courts of that county, and served two years. In the spring of 1881 he came to Dakota and entered one of the first homesteads just north of this town, which was not then platted, and which he has since cultivated and stocked, making it one of the best farms in the county. He was employed in the bank of Mitchell from '82 to '84, studied law, and in October of the latter year was admitted to practice, and the following year, through his perseverance and ability secured the full payment to depositors in the branch Bank of Mitchell of this place when the Bank of Mitchell failed. When the White Lake bank was organized, Mr. Ryan became its president, which position he still holds.

Gov. Church appointed him one of the regents of the University of Dakota at Vermillion, which institution he has materially assisted in bringing to its present state of success and prominence. Mr. Ryan has nearly always been a delegate to the territorial conventions and at the Watertown split-convention last spring was found at the "armory," and a member of the committee on credentials. His ability and worth was recognized Wednesday at the legislative diestrict convention at Kimball when he was unanimously nominated for councilman to represent this district in the territorial legislature.

Mr. Ryan's native ability and honesty of purpose have gained many friends for him outside his party, and he is the only man in the district that could draw from the Republican party sufficient votes to elect, where such an overwhelming majority exists. Of his election there is scarcely a doubt. 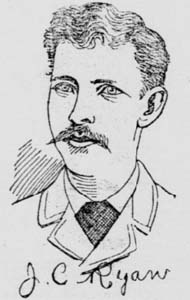