John A. Sorum, candidate for the office of sheriff of whom a picture is shown here was born in Allamakee County, Iowa, in 1868. Emigrated with his parents to Trail county, N.D., in 1880, and to Marshall county, Minnesota in 1890, and took up a homestead in the town of East Valley where he still resides.

Mr. Sorum has always taken a deep interest in all matters arising in the upbuilding of a new community and has repeatedly been honored by the township wherein he lives. Being a man of good habits, upright and honest, he soon became one of the most popular and best known farmers of the eastern half of the county.

As one of the members of the Board of County Commissioners for the last 4 years, Mr. Sorum has been prominently before the people of Marshall county. He has served the county and his district well and faithfully. His acts have been characterized by independence, care and economy in public matters. He has been tried and not found wanting and with confidence in his integrity and ability his friends take pleasure in recommending him to the voters of Marshall county.

~Note: he is likely son of Andreas Johanneson Sorum and Bertha Torgers Ronningen 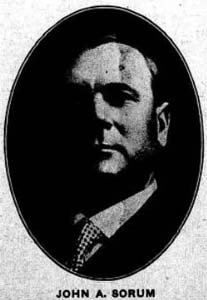