Vivian G. Huffman, age 89, of Waukon, Iowa, died Monday, April 18, 2011 at the Good Samaritan Center in Waukon, Iowa. Funeral services will be held Saturday, April 30 at 10:00 a.m. at Martin Funeral Home in Waukon with Pastor Tom Buresh officiating. Burial will be at the Oakland Cemetery in Waukon, Iowa.

Vivian Genevieve Nipper was born September 18, 1921 at Waukon Junction, Allamakee County, Iowa, the daughter of Elvis "Happy" and Cora (Atall) Nipper. She attended the rural school in Waukon Junction and graduated from the Waukon High School in 1939 with a Normal Training Certificate. She had to wait 25 days until September 18, 1939 when she turned 18 to begin teaching. She taught several years in rural schools at a salary of $65 a month. By the end of her teaching career, she was receiving $175 a month. On March 10, 1940 she married Vernon "Mickey" Huffman who had a Shell Gas Station and convenience store in Rossville, Iowa. Their home was part of the business building and would live all of their married there. She continued teaching at the Rossville School. After several years she resigned from teaching when they decided to enlarge the business, carrying groceries, hunting and fishing supplies.

Vivian joined the Rossville Presbyterian Church and became the organist, a position she held for over 64 years. She was very active in her church, holding all offices and never said "no" to any job. She was also a 50 year member of the Rebekah Lodge. Vivian was very active with community events and enjoyed visiting her many friends in the hospital and area nursing homes. After Vernon's death in 1986, she became an avid hunter and fisherman. She went turkey hunting when she was in her seventy's and got a turkey each season. She enjoyed life and thanked God for all the things he gave her. Vivian's good sense of humor, her smile, infectious laugh, and willingness to help whenever she could, made her a friend to everyone.

Vivian was preceded in death by her parents, her husband Vernon, and her two brothers, Norman Nipper and Elvis "Bud" Nipper.

She is survived by her sister, Verla (Pastor Willis) Longer of Monticello, Iowa; 5 nieces and 3 nephews and their families; and a very special friend, Wilbur Wilson. 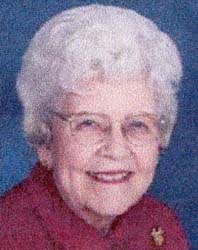