In these days of caucuses and primaries, it is most interesting to meet someone who has seen far more Presidents in her lifetime than there are total numbers of presidential candidates running for office this year. Nellie Farley, a perky resident of the Good Samaritan Center in Waukon, Iowa can remember back to before the turn of the century. She is one very special lady.

A total of 18 presidents have been in the White House since Nellie Farley's birth 100 years ago on February 8, 1888. She was born the year Benjamin Harrison captured the election by gaining more electoral votes than Grover Cleveland, the incumbent president, even though Cleveland had received more of the popular vote. Then, as now, was a year of national political conventions. In 1888, however, there were a few more national conventions to choose from. The Equal Rights Party held in Des Moines, Iowa, the Union Labor Party, the United Labor Party, the Prohibition Party, and the American Party as well as the Republican and Democratic parties all put forth names for the presidency.

The year 1888 was also a year of a terrible March blizzard that paralyzed New York City for two days and killed some 400 people. A yellow fever epidemic broke out in Florida and continued from the end of July into the month of December, also claiming over 400 lives.

The year 1889, a year after Nellie was born, saw North Dakota, South Dakota, Montana, and Washington, become states and join the Union. Other states would follow.

BORN NEAR WAUKON
Nellie Farley was born in Union Prairie Township in Allamakee County near Waukon, Iowa to a farm family which included four older brothers. Two of those brothers would go on to homestead in Kansas for a time, but would return to Iowa again. Another brother, the only one to marry, went on to become a doctor and teach at the University of Kansas.

Nellie Farley remembers that, as a child, Indians would come to their farm house door and be asking for something to eat. She recalls that the family was not very much afraid of them, and her parents would always give them food. She remembers only seeing them from a distance as her parents would make her and her brothers stay back and out of the way when the Indians came. She commented that the Indians would be just passing through and would not stay. Nellie remembers riding horses as a child. There were cattle, pigs, and chickens on the farm to tend as well. The ever-present summer garden was pretty fair in size. Nellie could not recall the first car she saw but remembers, When we'd see it (a car) going by the house, we'd run out and look at it.

TAUGHT SCHOOL
Miss Farley attended St. Patrick's School in Waukon which was originally built in 1883. She has been a life-long member of St. Patrick's Catholic Church. She stated that her parents were also members. She graduated from high school and then went on for some additional training from a professor in order to get her certificate to teach. Nellie became a school teacher in a frame-style country school near Dorchester, Iowa. She taught grades one through eight. Upon hearing the comment that this was a rather large age span to teach, Nellie simply stated that the country school teachers all did that. When asked about the greatest number of students she had taught, she commented that there were 42 at one time. She added that this was also her first term (first year) of teaching.

Nellie boarded with a family near the school and would walk to school and take her lunch, as did her students. She recalls in the winters, the school was mighty cold and you had to start the fire yourself to warm the school before the students arrived. Special times at the school included Basket Socials, spelling bees, and Christmas Programs. Nellie also remembers taking up collections for the Red Cross during the First World War. She recalls informational meetings and programs at the school during the war as well.

Nellie shared her memories of the influenza epidemic (approximately 1918-1920). She said, It was so bad, they closed my school for flu. She remembers going to funerals and wakes a great deal of the time that first year of sickness, because it struck old and young both. She did not catch the flu until the second year, even though during that first year, it was all over my school.

WIDE INTERESTS
Nellie Farley's interests went beyond the classroom. She spoke of her favorite president, Warren G. Harding. Nellie stated, We thought the world of him., but added that she felt much of the negative side of him was kept away from the people in this area for a long time. She stated that she felt Harding overcame a great many problems both in his private life and his public life. (President Harding served as president only 2 and a half years. He died of natural causes in 1923).

Miss Farley also spoke highly of James G. Blaine, a national political figure, whom she would have known about by reputation only. He died when Nellie was four years old, but was well-remembered for his personal charm, oratorical talent, and pioneering diplomatic efforts. He ran for the presidency in 1884 against Democrat Grover Cleveland and made a respectable showing.

Nellie stated that newspapers were the main source of information when she was young. She recalls her father enjoying his daily paper from Des Moines. Newspapers from other cities were also available.

Nellie Farley does not consider herself anyone special, but she is indeed one of Waukon's treasures. Talking with her is one way to turn back the pages of history and see what things were like from someone who was really there.

Many things have changed during Nellie Farley's lifetime and yet many remain the same. Teachers still teach, blizzards still can paralyze a town, people still suffer from the flu, and men of political power still find themselves touched by scandal sometimes.

Thank you, Miss Farley, for another lesson well taught. 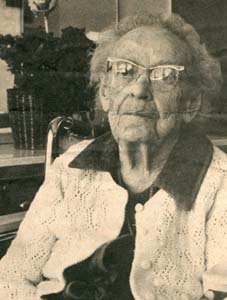