William Bill Aird took a flashlight to show his dining room in the evening because there is little light in it once the sun goes down. A stair leads from it to a cellar, which he does not use. His unpainted house stands on a hill above what used to be the town of Ion northeast of Monona, Iowa in Allamakee County, Iowa. It has electricity, the REC brought that 14 years ago. There is no water, a pump outside the door provides that. There is no plumbing. There is an outside toilet up on the hill. The place does have a telephone. We had to have that when the first baby came, he explained. The phone continues to be his primary means of contact with the outside world.

I call him once or twice a week and he calls me whenever he wants to, said Marvin Flack of Postville, Iowa. Marvin grew up in Ion and now visits Bill once a week. He always is in good spirits-- Certainly some of the neighbors look after him, but he don't need much looking after --he pretty well takes care of himself.

William Bill John Aird was born in the house 92 years ago and he has never lived elsewhere, except when in military service during World War I. Bud and Mary (his children) have been after me for years to go to a home, but I don't want to leave this place until I have to, he said. I have been here too damn long to leave. Bud (Robert) Aird, lives in Waterloo, Iowa and Mary (Helen Marie Martin) lives in Shullsburg, Wisconsin. A third youngster, Alfred William Aird died after being wounded in World War II.

Asked if it got lonesome, he responded disgustedly, Why wouldn't it? He said when he got lonesome, he would just weather the storm --maybe call up somebody on the phone. Call up somebody and ask him if I can borrow $10, he joked. He says, 'Well, you haven't paid back the $3 you borrowed last time'so I don't want to call him up again.

Bill has a pickup truck and a registered driver's license that permits him to drive 15 miles a day. When the weather is good, he drives that distance to Monona and back 4 or 5 afternoons a week, usually playing cards in a tavern there. When there is a baseball game on television Bill goes there a lot, Flack said. Bill played baseball for the Ion town team, beginning in 1909, pitching and playing second base. When that folded, he played for Rossville from 1919 or 1920 until the end of the '20s, and then for Waukon, continuing to play until 1942. There ain't a ball player left that I was with, he said almost with anger. Then he recalled with obvious delight, About 2 or 3 weeks ago Bill Dixon came to me in a Monona restaurant and said, 'I am Bill Dixon and I played against you.' I told him I wanted to shake his hand then and 5 years from now-- It really done me good to see him after all these years.

RATTLESNAKES
In the small room in which Aird spends most of his time, including most of his eating, sleeping, sitting, watching TV, and talking with visitors, stands an old crank victrola which worked 25 years ago and a sewing machine which he said probably had the same thread on it that his wife had put on it. She suffered from hardening of the arteries and was an invalid for several years before dying August 24, 1979. Asked why he did not move the victrola and sewing machine, he said, Where in the **** would I put them?

On the wall of the room hangs a rattlesnake skin. The thin, tough outdoorsman enjoys telling about how he killed that 2 or 3 years ago and some of the 20 or so others he has killed during this century. When they rattle, the damned hair on the back of your neck will stand up, the outdoorsman said. He, like many in the area in the first few decades of the century, speared fish even though that was illegal then. They speared at night to avoid getting caught but Aird enjoys telling about one time a game warden caught some spearfishermen, and broke the spears in two. He told about the fun he had spearfishing and the large quantity gotten in the Yellow River near where it runs through Ion, saying, It was like a fair. Asked if he was ever bothered about breaking the law when spearfishing, he paused, indicated he thought the question was stupid, and replied, Everything we did was illegal. There was so many people spearfishing, Marvin Flack said. They didn't waste the fish, so I should think they would let them do it, added Thelma Cowell, who grew up on Irish Ridge near Ion and was also visiting with Aird about the town's earlier days.

Flack said his father (about Aird's age) often seined fish on the Yellow River even though it was illegal. People from Waukon came down here to seine. Cowell added. Aird said he did not like seining fish even though he loved to spear them. When you seine you get wet up to your neck, he explained.

William Bill John Aird was born on August 24, 1895 at Ion, Iowa to Robert and Minnie (Huse) Aird. On November 21, 1918, Bill married Lillian Emma Marie Fett, at Waukon, Iowa. Lillie was the daughter of Emma (Schlitter) and Fredrick Herman Fett. Bill Aird passed away at the age of 101 at the Good Samaritan Home Center in Waukon, Iowa on February 6, 1997. To say that Bill was a character, would have been an understatement! His reputation for catching rattlesnakes and taking the rattles to the Waukon Courthouse for the bounty was widely known around the county.

Bottom L-R:
1. Bill said he rarely uses the wood cooking stove in his kitchen because it doesn't pay when he cooks for only one person.
2. Bill walks toward his oil stove, which he uses to keep the temperature in his home near 80 degrees.
3. Bill uses his pump, his only source of water. He said it did not bother him to have to use an outside toilet, even in the middle of the winter because You are too busy to get cold! 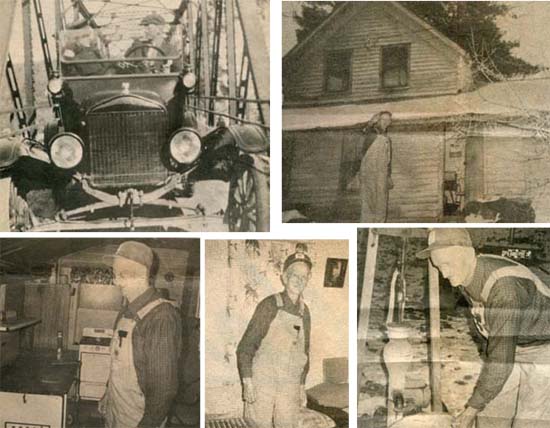