Johanna Klara Weiss was born June 23, 1920 in Kulm, Romania, the daughter of Daniel and Lydia (Schwab) Henke. Johanna was baptized July 11, 1920 and affirmed her faith April 29, 1935 at the Evangelical Church in Kulm, Romania. She attended school through 8th grade.

Johanna was united in marriage to Immanuel Weiss on August 14, 1938 in Kulm, Romania. They had been married for 67 years and raised seven children: Cheri, Hilma, Gerda, Erich, Siegfried, Gerlyn and Arnold.

Johanna and Immanuel immigrated to the United States on April 29, 1952 and made their home in Humboldt County and later Palo Alto County in Northwest Iowa. The couple purchased their farm on December 2, 1952 in Pleasant Township, Winneshiek County where they moved and farmed together for many years. They retired from farming in 1981. After losing her home several times during World War II, she treasured her home in Locust. Johanna was active with the ladies circle of St. John's Lutheran Church also at Locust.

Johanna continued to stay very active. She had a big garden and many fruit trees. This produce was shared with friends, relatives and her church members or canned and frozen for the winter cooking. She loved cooking and insisted that all had more than enough to eat. Her plum and apple kuchen were enjoyed by many who entered her kitchen. Johanna was head of the kitchen, but she kept her finger on the pulse of farming. She knew what was going on with all phases of the farm work, personally helping whenever needed. Even in her later years she got great enjoyment out of surveying the crop conditions, watching the weather, and riding along in the combine at harvest time. Her motherly instinct never wavered, she loved keeping in touch with her children and being assured that everyone was doing well.

Johanna was preceded in death by her parents; her husband, Immanuel on August 6, 2006; a son, Siegfried on December 7, 1996; two sisters, Eliza Roloff and Ottilia Rauter; and one brother, Teoder Henke. 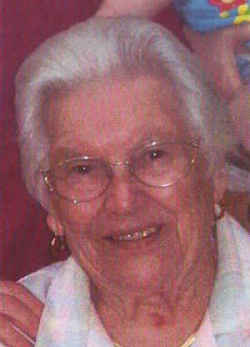