Edna Jeanette (Severson) Fisher was born on May 20, 1917, the daughter of Henry and Clara (Stoskopf) Severson in Winneshiek County, Iowa. Edna attended Pleasant #5 rural school and graduated from Decorah High School in 1935. Edna married Norman Fisher on August 9, 1939, at St. John's Parsonage in Locust. Edna lived on a farm all her life; helping with farm work, growing a garden and flowers. She was a member of St. John's Lutheran Church in Locust for many years. She enjoyed ladies aid, making quilts and teaching Sunday school. Edna's greatest joy was her family, grandchildren and great grandchildren.

Edna was a very special lady, who always had a smile for everyone and was just a joy to be around. 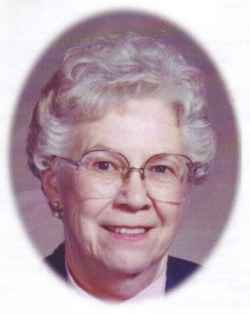