From the Sioux County Capital, October 20, 1988, p. 8: Photo of George Meyer, accompanied by this caption:

George Meyer standing in a field near farm machinery. Caption: George Meyer lived on 44 acres recently named a Century Farm near Maurice when his family moved from Livingston, Montana in 1915 until he left the farm in 1925. The first year on the place, a tornado took off the roof of the family home and swept away the nearby schoolhouse, too. The house was rebuilt and still stands. His grandfather Jacob Meyer purchased the land June 28, 1882 when he moved from Peoria, Illinois. His father, Frank, owned the land, then George. Presently the land is managed by Golden Oaks, Inc., a corporation in Arnolds Park, formed by his immediate family. 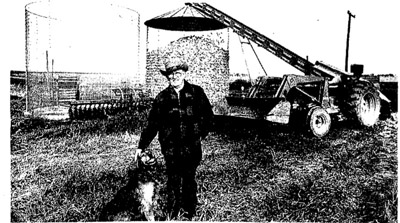