The following is an excerpt from the Hulstein familys book, which was published approximately in the 1950s:

Cornelius Hulstein was born in Bennekom, The Netherlands, on March 30, 1830. Rijke Van Roekel was born in Bennekom, The Netherlands, on January 4, 1833. They were married at Bennekom on October 11, 1856. Cornelius was 27 and Rijke was 24 when they were married. Their first home was at Bennekom in the Bennekom Hel. There they lived for 16 years, managing a farm for Mijnheer Vreede. The Dutch phrase would be zetboer. On October 10, 1858, William Cornelius was born.

There were many rabbits in The Netherlands as well as there are in Sioux County today. Cornelius was a great hunter. Because of the limited territory and the scarcity of rabbits, they were not allowed to shoot them. But many a time the temptation was too great for Cornelius; his shot was often measured from the window and his wife would stealthily go to the place to pick up the captured rabbit. At one time, Hulstein shot the family cat by mistake. The next morning, the Veldwachter said, Gij hebt een moote Haze.

Mrs. Cornelius Hulstein was often visited by two rich women who had never married. They gave Mrs. Hulstein a beautiful coat just before they were ready to sail for America. Since people did not frequently wear their very best clothes only when going to some special meeting, the coat was not worn very much. Later on, the coat was sold and the women gave her a Psalm book.

In April 1871, the family left for America and landed at Pella, Iowa. They lived in Pella the first part of that year and then decided to move to a farm in the Pella vicinity. On November 12, 1878, Cornelia was born at Pella. This was the only child born to them in America. The others were born across the sea.

Although their family liked Pella, Hulstein wanted to go further in the great, free land. In May 1878, he and Jan Thomases adventured into Sioux County to rent a farm. The land seemed fertile and fine to cultivate into crops. When Hulstein and Thomases went to Sioux County, Hulstein was holding the horses that they had behind the wagon and he got the halter rope around his finger and the horses pulled a muscle in his arm.

In June 1878, William, the oldest son, went to Sioux County, near the town of Sioux Center, to see how his father was getting along. Hannes De Brake and William Hulstein went with a covered wagon. The roads were rough and narrow. It took many days to travel the distance between Pella and Sioux County.

While in Sioux County, hay was made and much prairie was broken. Much hard work was carried on in prospects of making a new home. In the following February, in 1879, the family left Pella to settle permanently in Sioux County. Mr. and Mrs. Cornelius Hulstein, Johanna and Cornelia traveled to Sioux County by train. The boys, William, Gerrit and Steven, went with a covered wagon; they had many adventures and many hardships while traveling.

The first place the family lived was in Sioux Center, in the region which was later called Old Town, about 80 rods west of First Reformed Church. There they managed a farm for three years. In the time they lived there, a church, blacksmith shop and store were set up.

In 1879, the first year of their new adventure, no crops thrived. First, the grasshoppers molested them by destroying the small grain. Later, in the fall, a hailstorm destroyed much of the corn crop. Many people then moved to different parts of the United States.

In the fall of 1880, an epidemic of diphtheria, or Black Death, broke out. It came into many homes and also entered into the home of the Hulsteins. Johanna was severely afflicted and she died at the age of 13 in September 1880.

The winter from 1880 to 1881 was severe. Mountains of snow covered most of Sioux County and the cold was extreme. The snow was as high as the telegraph posts. Sometimes one approached the roof of a house without knowing about it. Much corn remained in the field. In order to obtain the corn, a horse, accompanied by a dog, went along to get the remaining corn. Hay, corn and corn stalks were burnt as fuel.

Cornelius Hulstein and family lived in Old Town for three years, when in 1882 they moved a half mile north of the northern corner of Sioux Center. There they lived until 1889. Their son, Steven, remained on the farm. Then they built a house on the northwest corner of North Sioux Center. There they lived just one year. Then they moved to a house a quarter of a mile north of the former location. There they celebrated their 50th anniversary on October 11, 1908. 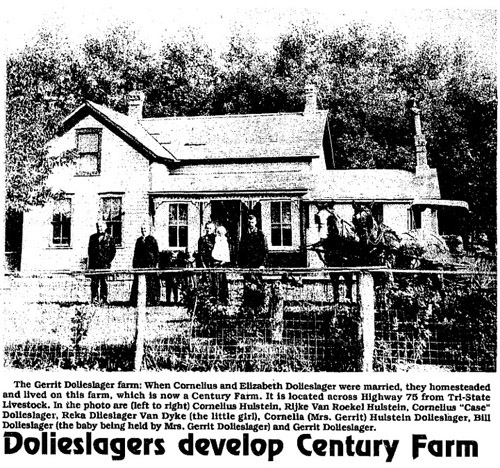