This family history was taken from the Sioux Center Centennial Book of 1991 page 619, and was submitted by Theresa Vander Ploeg. It was transcribed for this Bios and research additions added by Wilma J. Vande Berg.

Tjasse was a clothing salesman in a small store, but business was not prosperous and decided to go to America, and in May 1881, they started out. It was a very slow and difficult voyage as no modern convenience were at hand and many hardships. They had two small children and they were sick during the voyage. For twenty-seven days they sailed the sea and finally arrived in Alton, Iowa, where they were given shelter. The baby Nicholas, died June 8, 1881, and is buried in Alton IA.

They moved to Sioux Center, Iowa, the following year where Tjasse became a carpenter. Later his rheumatism bothered him so much that he had to stop and then started a furniture store. Also the Dominie (minister) at the time talked him into becoming a funeral director, because they had to make their own caskets and he could do that along with his furniture business. The Vander Ploeg Furniture and Funeral business continued down through the years.

Obit of Tjasse Vander Ploeg
Source: Alton Democrat (2-28-1930)
Born: January 23, 1854
Died: February, 1930
Well Known Resident Gone, Tjasse Willem Vander Ploeg Funeral on Thursday
Funeral services for Tjasse Vander Ploeg were held Thursday afternoon at the home and First Reformed Church, in charge of Reverend Brunsting. Mr. Vander Ploeg was 76 years of age.
He was born in the Netherlands, where his marriage to Taaktje Valk took place more than 51 years ago, the couple having celebrated their golden wedding not long ago.
They came to America about a year after their marriage and settled first at Alton where they lived for a year, then came to Sioux Center which has since been their home.
Mr. Vander Ploeg was in the furniture business here for eighteen years, but retired about 23 years ago.
He was respected by all and his memory will be cherished by his widow and the ten children who survive, namely, Mrs. John D. Rozeboom, Steen, Minnesota; Mrs. Henry Van Roekel, Nick and Charles, Sioux Center; Mrs Gerrit Huitink, Orange City; John, Sebastopol, California; Mrs. Reverend Raymond Lubbers, Sheboygan Falls, Wisconsin; Will, Maurice; Mrs. Teunis Den Herder, Mrs. Dick Raak, Sioux Center.
Two children have passed on, the oldest being buried in the Alton Cemetery.
He is also survived by a brother, John, of Orange City and a sister, Mrs. K. Theget of Roseland, Minnesota
Mr. Theget and daughter Winnie were for the last services, also Mr. and Mrs. John Vander Ploeg of Orange City and a niece and nephew, Mr. and Mrs. Henry Wesselink of Springfield, South Dakota.

Source: Sioux Center News (1-2-1941)
Born: March 13, 1855
Died: December 31, 1940
Mrs. Taaktje Vander Ploeg Passes Away
The oldest member of the First Reformed Church passed away at her home Sunday at the age of 85 years. She was ill for several weeks preceding her death and in a coma for twenty seven hours.
Funeral services were held in the First Church Tuesday. Bearers were all grandsons of the deceased were pall bearers.
Taaktje (Valk) Vander Ploeg came to America with two children in 1882 and to Sioux Center in 1883. Ten children were born here and ten survive.
They are Mrs. J.D. Rozeboom of Steen, Mrs; Henry Van Roekel, Nick Vander Ploeg, Charles Vander Ploeg, Mrs. Dick Raak and Mrs. Teunis Den Herder all of Sioux Center, Mrs. G. Huitink of Orange City, Mrs. R.J. Lubbers of Sheboygan Falls, Wisconsin, who was here for the funeral, John, of Yucalpa, California and William of Hospers.
Fannie, a daughter, died about 41 years ago, at the age of twelve years, and another infant died before they moved from Alton, to Sioux Center. Her husband Tjasse Vander Ploeg preceded her in death in February 1930.

In the Sioux Center Centennial book of 1991 page 203 Business Section, Art Vander Ploeg wrote a story on the family business.

The oldest Business in Sioux Center to have remained continuously within one family is the Vander Ploegs Furniture Store and Funeral Home. It was founded by T. Vander Ploeg in Jan 1892 a few months after Sioux Center was founded (incorporated) in Aug 1891. T. Vander Ploeg bought Land for $200 on Main Street to put up his building and headed these two establishments for 16 years. In 1908 his son Charles bought the business and remained at the helm for 35 years. Charles was succeeded by his son Arthur and later the business was taken over by his son Stanley Charles and Arthurs son in law Howard Beernink.

During the time of T. Vander Ploeg facilities for embalming were taken to the home of the deceased and the necessary preparations of the body were done there. He built and outfitted caskets as they were needed. Whatever lumber was available was used. Sometimes the remains were packed on ice to preserve for a period of time. A black carriage drawn by a team of matched black horses were used to take the remains to the cemetery.

In 1908 Charles graduated from the college of Mortuary Service in Des Moines, Iowa. He was one of the first licensed embalmers in Sioux County. The first building to be designated specifically for a Funeral Home is the present Vans Jewelry building. Charles also used a Horse drawn funeral coach until 1918. Charles earliest means of delivering furniture was a small man made cart. He later usd a wagon pulled by horses and later used a gas driven truck. Charles three sons were licensed embalmers  James, Arthur and Harold and two of his grandsons  Philip and Stanley.

Arthur graduated from the college of Mortuary Science in St. Louis in 1935. He worked with his father for a few years and then took over the business. In 1948 a Funeral home and residence was built to better meet the needs of the community. In 1955 he built a furniture store north of the residence an later in 1966 he added a large warehouse. In 1962 the Funeral Chapel south of the residence that is currently used for funerals as built.

Stanley graduated from the college of Mortuary Science in Dallas, Texas in 1964. Stanley and Howard purchased the Furniture Store and Funeral Home in 1968

Submitted to the Centennial book by Arthur Vander Ploeg. 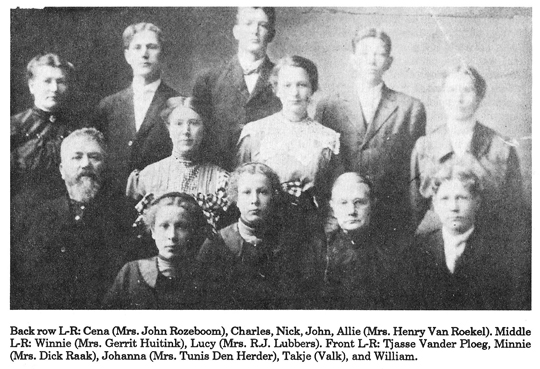