This family story was taken from the Sioux Center Centennial Book of 1991 page 603 & 604; submitted by Priscilla Van Putten. Transcribed for this Bios by Wilma J. Vande Berg with some research additions.

While in Holland they lived in Gelderland. The Province was located in southeastern Netherlands adjacent to the German province of West Phalio. His occupation was farming. Eibert and Petertje immigrated from Gelderland to Alto, WI. They were married by the Justice of the Peace in the town of Alto, in Fond du Lac County in Wisconsin on Jan 6, 1870. While living there, their first baby was born on Oct 25, 1870. They named her Jentje (Jane or Jennie).

Eibert and Petertje and three other couples (all relatives) decided to take four covered wagons pulled by oxen, and travel to Sioux County. Their daughter Jennie was nine months at the time of the trek to Sioux County. She was the only child in the group. They took a cow with them so there would be milk for the little Jentje. They traveled all day and stopped for the night. When stopping, they tried to be near a sod hut so they could trade some milk for bread. To protect the group from the danger of Indians and wolves at night they arranged the wagons into circle and took turns sleeping.

They never traveled on Sunday but had their own church service. After walking several miles the cow stopped and could go no farther, due to her sore feet. So they bound a donkey shoe and broke it in half and put these two pieces on the two front feet of the cow. What a Victory! The cow could walk again, so they traveled on. When they came to the Mississippi River, they stopped to take a ferry boat and got across on that.

When they came to Sioux County, Eibert and Petertje homesteaded south of Sioux Center where the Sioux Preme Packing Company is located today. The Homestead Deed signed by Rutherfrod B. Hayes, who was President of the United States from 1877 to 1881. After first living in a sod hut for awhile, Eibert decided to build a wooden house. So he went to Le Mars with the bottom part of the wagon to get lumber for the house. Mouw of Orange City built the house. This was the first wooden house that was built on the west side of West Branch.

They were members of the First Reformed Church. Eibert served on the consistory both as a deacon and an elder .

Eibert and Petertje had eleven children. According to age they are as follows:

OBIT of Petertje Den Herder Mrs. Eibert Vande Brake
From the Rock Valley Bee, April 1, 1921:
Mrs. VandeBrake, mother of druggist Bert VandeBrake, died at her home in Sioux Center Monday afternoon. She had been sick for about two weeks with pneumonia. Funeral services were held at Sioux Center Thursday afternoon. The deceased had reached the age of seventy years, and had always enjoyed good health, until last fall, following the death of her son, Will VandeBrake. She never seemed as well after this great shock. Her husband died several years ago. The deceased was the mother of eleven children, seven of whom are living. The bereaved children have the sympathy of many friends in their great sorrow.
[Her son was shot to death in front of his place of business by an unknown assailant. See his obituary, posted separately.]
* * * * * * * * * *
From the Alton Democrat, April 9, 1921, p. 8: Sioux Center news:
Mrs. Eibert Van de Brake died in town here last week at the age of 64 years. She had lived in this community for about fifty years, and therefore endured with the others privations as well as enjoyed the prosperity of Sioux County. Her husband had passed away a number of years ago and she is survived by four adult children, Mrs. E. E. Den Herder, and Miss Winnie of Sioux Center, Gerrit a farmer south of town and Bert a druggist at Rock Valley. In addition thereto she leaves a large number of grandchildren. Three of her children died in this county during the last few years, each of them leaving a family of children. They were Mrs. John Harmelink of Rock Valley, Henry E. Van deBrake of Sioux Center and William foully murdered at Rock Valley last fall. Few of our people have thereto felt the hand of Providence with heavier weight during these last years than the descendent Mrs. Vande Brake. The funeral services were at the First church of which she had for many years been a faithful and active member. Her remains were laid to rest in the silent little city of the dead just to the south of town.
* * * * * * * * * *
A message of thanks from her family published in the Sioux Center Nieuwsblad, April 13, 1921 confirms her death date as Monday, March 28, gives her birth name as den Herder, and says she died at age 69. No actual obituary was located in this newspaper.
The Sioux County Cemetery Index has Vande Brake, Petertje, b. 1851 d. 1921, Memory Gardens Sioux Center IA.
FiindaGrave.com has Petertje Den Herder Vande Brake, born Aug. 13, 1851 in Ermelo, Ermelo Municipality, Gelderland, Netherlands (no source given for this information); died Mar. 28, 1921 in Sioux Center; spouse Eibert Vande Brake (1840-1913); children Jennie Vande Brake Harmelink (1870-1913), Gijsje Vande Brake Den Herder (1876-1951), Henry Eibert Vande Brake (1878-1918), Gerrit E. Vandebrake (1884-1975), Winnie Vande Brake Lammers (1887-1972), and William Vande Brake (1890-1920). 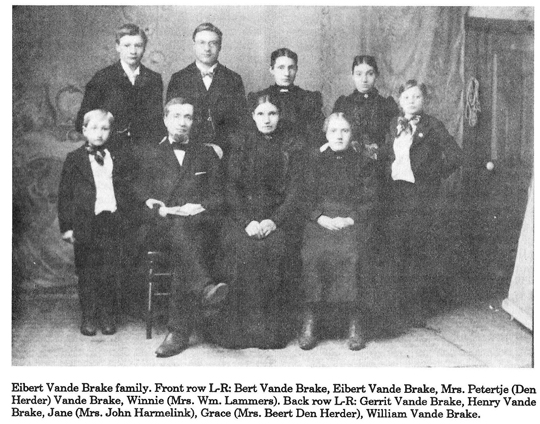