This family history story was taken from the Sioux Center Centennial Book of 1991 page 614 & 615; it was submitted to the book by Dick Vander Berg. It was transcribed for this Bios by Wilma J. Vande Berg, and some research notes were added.

Epke Vander Berg was born in Friesland Netherlands on Jun 7, 1857. At the age of 24 years he immigrated to America in 1881 and settled in Le Mars, Iowa. In Le Mars he was an exchange clerk, employed with Plymouth Mills. He married Sintina Van Dalfsen born April 15, 1864. She was a sister of Andrew Van Dalfsen.

In 1903 Epke and Sintina Tina came to Sioux Center where Epke established himself in the coal and grain elevator business. He was active in the elevator business for 25 years. He retired in 1928.

Epke was a city alderman and an organist in the Christian Reformed church when they came to Sioux Center. He could compose his own music. Epke served on the church consistory in Le Mars and in Sioux Center.

2.Etta Vander Berg born February 24, 1892 married Fred Aue. He worked in First National Bank as a clerk and later was president. They lived in the east part of Sioux Center and had no Children.

3.John Vander Berg born February 28, 1894 married Bertha Prins. John was in the elevator business, sold Ford cars and fabric tops, was in the piano business and farmed. They lived in Sioux Center and have four children: James, Elmer, Ruth (Mrs. A. F. Korver) and David. There is a separate story on John and Berths family in this book.

6.Dick Vander Berg born November 30, 1900 Married Nelvia Van Kley. He was in the elevator business in Sioux Center. They were the parents of three children: Milton, Eldon and Karen. Their story is given separately in this book.

9.Ida Vander Berg born September 22, 1908 married Pete Baartman. He was a trucker in Sioux Center and they had two children, Dawn and Earl Baartmen.

Above family history was submitted to the Sioux Center Centennial book by Dick Vander Berg.

Obits of Epke and Sintina:

Sioux Center News July 13, 1933
Epke Vander Berg, a Sioux Center resident for the past thirty years passed away quietly early Tuesday morning having been ill for some time with cancer of the stomach.
Mr. Vander Berg was born in the Netherlands, June 7, 1857. When he was 24 years old he immigrated to the United States, settling in Le Mars. While in Le Mars he worked as n exchange clerk in the Plymouth mills for over twenty years. He was married to Sintina Van Dalfsen while he lived in Le Mars. In 1903 Mr. and Mrs. Vander Berg moved to Sioux Center where he entered the coal and grain business. He continued in this company until six years ago when he retired from active work.
Mr. Vander Berg has always taken an active part in his church. During the fifty five years of his life he was an organist in some church staring at sixteen in the Netherlands. In order to improve the singing of the Dutch psalms, Mr. Vander Berg composed some music to be sung with the psalms for the four voices. Besides being Church organist for so many years he was a consistory member for a period of thirty years, both in Le Mars and Sioux Center. However, he did not confine his activities only to church work but served for several terms in the city council here.
Mr. Vander Berg leaves to mourn his departure besides his widow, one brother, J. D. Vander Berg of Shockwell, Ind.; two sisters, Mrs. H. L. Dambrink, and Mrs. L Luiken, both of LeMars; nine children John, Douwe, Dick, Tena, Etta, Mrs. Dan Dykstra, Mrs. P. Baartman, all of Sioux Center; Mrs. John Grittrs, of Boyden; and Dr. E. Vander Berg of Grand Rapids, Mich.; and twelve grandchildren.
Funeral services will be held this Thursday in the First Christian Reformed Church, Rev. J. M. Dykstra, officiating.

Vander Berg Sintina (Mrs. Epke) 1864-1944
Born: April 23, 1864 The Netherlands
Died: March 17, 1944 Sioux Center, Iowa
Mrs. Epke Vander Berg passed away at her home early Friday morning March 17, 1944 at the age of 79 years and 11 months. She had been ill for some time due to heart trouble.
She is survived by her nine children namely: Miss Tena Vander Berg who made her home with her mother, Mrs. Fred Aue of Sioux Center, John E. Vander Berg of Sioux Center, Mrs. John Gritters of Hull, Dowie and Dick Vander Berg both of Sioux Center, Dr. Edward Vander Berg of Holland, Michigan, Mrs. Dan Dykstra of Woodsstock, MN., and Mrs. Peter Baartman of Sioux Center.
Also one sister, Mrs. Peter Vander Platts of Bejou, Minn and a brother Andrew Van Dalfsen of Sioux Center.
Funeral services were held on Monday afternoon March 20 at 1:30 at the home and 2:00 o'clock at the First Christian Reformed Church with Rev. Arnoys officiating. Burial was made at the local cemetery and acting as pall bearers were John Kroon, Gerrit Horstman, Adolph Eshuis, Wm. Boone, Art Van Kley, and A. Ten Harmsel.
Mrs. Vander Berg was born in the Netherlands on April 23, 1864 and spent the last 40 years living in this community. She was preceded in death by her husband who passed away on July 11, 1933.
Source: Sioux Center News March 23, 1944 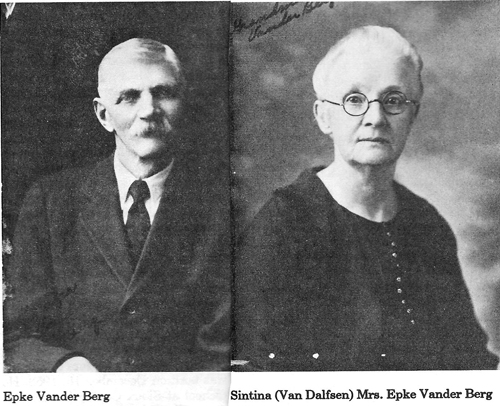