Mass of Christian Burial will be 11:00 a.m. Wednesday, June 19, 2013 at the St. Wenceslaus Catholic Church in Spillville, IA with Rev Donald Hawes presiding, burial will be in the church cemetery

Anna Mary (Hageman) Ondrashek was born April 3, 1927, to Joseph and Elizabeth (Kriener) Hageman near Calmar, IA. Anna attended St. Aloysius School in Calmar and later obtained her GED. Anna married Edward Ondrashek on May 24, 1949, at St. Aloysius Catholic Church in Calmar, IA. Together they farmed southwest of Spillville until 1975 when they moved to Fort Atkinson. In 1987, they bought their home in Spillville, IA. Anna worked in nursing homes and at Rockwell Collins in Decorah for 13 years. She retired from Rockwell in 1990, due to health reasons. They enjoyed driving out in the country to view the crops, playing cards, crocheting, and traveling. She also enjoyed listening and dancing to old time music. Anna was a member of St. Wenceslaus Catholic Church and the Tri-County American Legion Ladies Auxiliary #605 in Protivin. 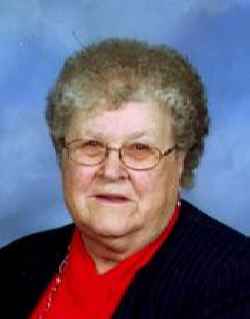